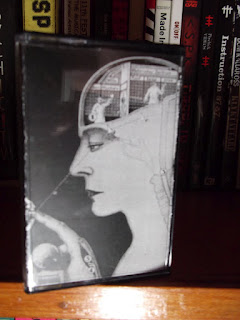 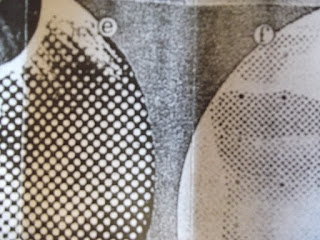 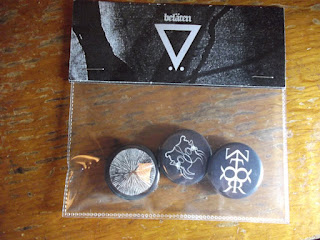 There is still a small corner of Hartop Towers that will forever be Sweden, with three packages full of tapes and badges and CDr's coming from that country in the last 24 hours.
I am on the Belaten mailing list. Recommended as their output is usually ultra limited and sells pretty damn fast. I learnt my lesson with the Michael Idehall "SOL" cassette, so now I am a fully paid up member of the Belaten "fan club" ... membership is free.
Belaten is the label operated by Thomas Ekelund of Trepaneringsritualen, their output (so far) has been in the dark ambient, occult territory with cassette releases from the aforementioned Idehall, Trepeneringsritualen and Aether, so "A Somatic Response" has come as a bit of a (pleasant) surprise. The tape is a compilation, a mix tape curated by the project Soma Sema, and if I had been told that it was recorded 30 years ago (1982) I would have believed it. The cassette is mainly electro-pop. Electro-pop music, electronic music made as if hardhouse, rave, jungle, drum n' bass, gabba, chip n' pin, gazebo thrust and cornfeed hadn't been invented. ( I made those last two up...OK). Also it is electronic music with electronic instruments...no laptops or apple macs on this tape.
I am in no authority over these projects. Apart from Soma Sema and Lust For Youth I had not heard of any of the participants and I have only heard of Lust For Youth because Paul (The Baron Bumblood) Watson recommended a couple of their releases to me last month. I know that Thomas is the "musician" in Soma Sema, and I recommend their 7" "Artificial Heart" on the No Emb Blanc label...but don't expect Trepeneringsritualen! Check out the promo video on YouTube. So the tape kicks off with Blitzkrieg Baby, who I believe is Norwegian. "Your Happy Place" has a militaristic beat and very dramatic synthesizer. Think early Ministry with very early Portion Control and a pinch of Laibach and that is the sound of Blitzkrieg Baby. Television Set provide a track that has "bedroom" written all over it. Guitars with a casio keyboard and drum machine. "Staveley Shed" could be a Stuart Moxham demo for Rough Trade in 1981. Instantly likable, as is "Expose" by Vita Noctis. I knew nothing about this band other than they sounded Belgian, they sound like Repetition. Remember Repitition? Their 1981 "A Still Reflex" 7" is one of my all time favourites. The sound is pre-goth..I have a feeling that this could be "minimal wave". Excellent stuff and I want to hear more..I want to hear more Repetition as well. Club Amour are a Depeche Mode tribute band, and have me dancing. Excellent stuff, I can say that I like the odd Mode track "Photographic" from the 1981 "Some Bizarre Album" being prime example and Exhibit "A" m'lud. Nimam Sregleda sound out of place here, too experimental with their sheet metal beating and voice manipulations.Makina Girgir are French and bring us back to the 1980's with "Alpha". An electro-motorik beat, a sci-fi soundtrack that brought the sound of Cerrone back into my life. "Kord" end Side A with a 1970's vocoder disco track, back to Cerrone with a hint of Telex and Kraftwerk. Side A is excellent, retro-lectro but still fresh. Side B begins with Estroboscorpio ~ no me neither. "Slugs" has a great synth pulse with random electro squeeblings before acoustic drums and echo (in a void) vocals come in and fill the track out. Pure Danse Society and it sounds like Estroboscorpio were having great fun playing it. The next couple of pieces bring the cassette down somewhat. Lust For Youth provide an aimless and flat instrumental which is a shame...and Goz Mongo Alliance lose the plot a little with bad drum programming and a monotonic vocal. Like Television Set, the track could have been released (as a B Side) on a Rough Trade Records single from 1980. Estonian vocalist Xiu follows with swimming synths and harmonies, very ethereal and the compilation (sorry, mix tape) ends with Soma Sema and "Dream Baby Dream". This song could win Eurovision for Sweden (never mind "Euphoria"!). A beautiful female voice repeats "Dream Baby Dream" over a tight sequencer pattern that travels through a plethora of studio effects. Simply beautiful. Just a shame this track is at the end of Side B and not on Side A with the "other" great electro-pop tracks. Ah well.

It is great that Thomas wants to share his love for 1980's electro-pop and bring to the fore projects that deserve a listen, a fresh ear if you like. There are a couple of projects on this tape that I want to hear more from and in some cases will part with my hard earned to get my ears around it. The tape is limited to 200 and comes with a password to download the tracks from the Internet and into your ipod, or Mp3 player or whatever.....worth the money. Spend a few pennies more and get the new Belaten badge set. I did!
To get this cassette and on the Belaten mailing list go to www.belaten.se