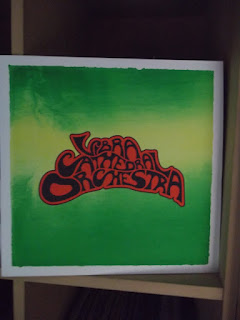 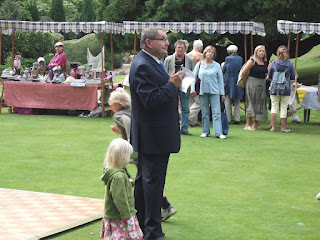 Have just spent a pleasant while listening to the latest release from Vibracathedral Orchestra, the eponymous double album re-release on VHF Records. Originally released on their own label back in 2004, VHF have re-issued with the same cover but with a bonus DVD.
I have come late to the work of Vibracathedral Orchestra, they used to be a bug bear of a very close friend and included a member called Stream Angel of whom we should only avoid...I think a woman was involved...but anyway VCO were strictly verboten and I missed out. Discovering the work of Neil Campbell & Astral Social Club over the past five or six (great band) years it is only natural that I would get to hear Vibracathedral Orchestra.
I have been picking up bits and pieces, odds and sods here and there - 7"'s and live tapes and as soon as I saw this album advertised I knew it had to be heard. The original sells for funny money on the Internet!
The sound of Vibracathedral Orchestra here is the sound of Section 25 circa their "Key Of Dreams" album and of Neu! and Popol Vuh (and undoubtedly a host of mid 1970's Krautrock troupes that I have never heard of). There is also a hint of mid 1980's Soviet France, the time when they were producing "Eostre" and "A Flock Of Rotations".
Surreal moments of July 2012. The other day I found myself singing along to the song "I Ran" by A Flock Of Seagulls with Frank O'Farrell's grandson. A couple of weeks ago I had to shout at my kids for running around the legs of Ray Reardon at a charity garden party whilst he was trying to give a speech. Surreal.
But I digress.
Four sides include extracts of pieces culled from larger improvised pieces. At times the feel is Eastern, zithers and sitars mix with tablas and maracas ~ although I know non of these instruments were used in the recordings ~ and at other times it is pure head down no nonsense mindless trance. The sides are edited as if the tracks were recorded in one long session. Rather like Section 25 and This Heat used to do. It is sheer genius. I have played this album loud so it rings throughout the house and I have played it blind drunk on the headphones and it remains a classic release, and easily file-able along side the releases of Astral Social Club and Ashtray Navigations.

The sound, delivery and approach takes me back to 1985 when a group of friends used to gather in a room in a squat in Central Manchester and make a noise. We used to have a "rehearsal space" in John Nash Crescent in Hulme, Manchester 15 and we would gather once in a while and make a noise. There would be half a dozen or so of us with guitars, bass guitars, keyboards, drums, microphones... a pre-ritual of hot knives, chillums, bongs, spliffs and/or alcohol would take place then we would pick a chosen instrument and "jam". I used to record every session. I used to mark the tapes either "Filth Family Incest" or "Initiates Of Carnifex" depending on the mood of the jam. "F.F.I." tapes were harsh like Einstruzende or Swans whereas "I.O.C." tapes were like....well, were like Vibracathedral Orchestra. Non of these tapes exist now of course. Living in Hulme in the 1980's - everything was temporary.
One day I shall (again) make a noise like VCO.