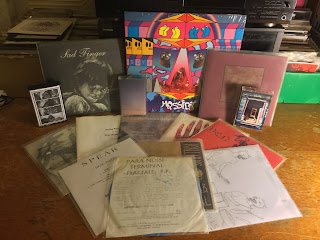 Sorry for the delay in writing this … It has been a busy time of late … Chris Booth was working the AdpTour in Totnes and when he popped in to the studio at 10pm to give me a lift back to Torquay we forgot to download the recording on to my USB, so I have had to wait for it to arrive via E Mail. Anyway - enough excuses..here is the latest MuhMur Radio Broadcast. (Copy + Paste) :
https://www.mixcloud.com/muhsteve/muhmur-radio-soundart-radio-broadcast-18082016/

It has been glorious weather here in Devon over the last few days (great band), so glorious it has made me feel like digging out some old Drone Records releases and sitting back and relaxing … It has been great to rediscover some sounds that I haven't heard in many many years. I thought I would play a few on programme. Also in the mix is the new 10" single from Massicot. It's a single produced (initially) for their UK tour which is happening at this moment. I am co-promoting their gig in Exeter on August 26.

This will be the final programme for August, the next broadcast will be on September 15. (20:00). 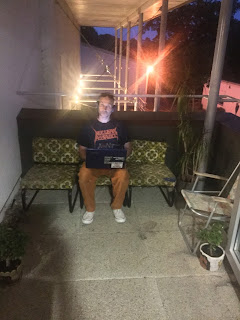 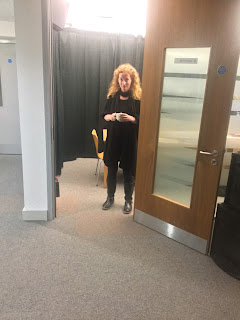 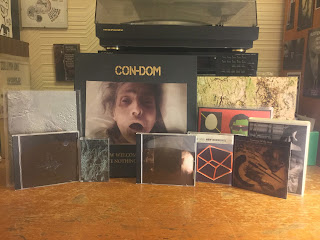 Tonight's broadcast is an example of what has come through mail lately at MuhMur HQ. In July I received a package from Chicago based label NO PART OF IT, I have asked the guy who runs the label, Arvo Zylo, if he is interested in sending something "special" for a broadcast, which I am happy to say he is … and in the meantime he sent me some of his recordings and releases. The Arvo Zylo "Hello Walls" Cdr has rarely been out of the disc player. Also of note is the Arvo Zylo and Bryan Lewis Saunders collaboration tape "The Pleasure Tunnel". NO PART OF IT (always capitals, I have no idea why) has a band camp page to listen, and purchase .. treat your ears : https://nopartofit.bandcamp.com
Also in the mix is a side of the new Con-Dom album "How Welcome Is Death To I Who Have Nothing More To Do But Die". Released in June this year this album has blown me away. Always expect strong stuff from Con-Dom but this album takes his sound to another level. It is a classic!
Anyway … I slipped in a track from Ludus as I was trying to find a recording of Throbbing Gristle live at the YMCA (London) in 1979. I thought I had it on cassette, but no … but I did find that the YMCA gig was part of a four day "festival" organised by London promoters Final Solution and on August 4 in 1979 Ludus played alongside Prag Vec and The Tiller Boys. So … I played some Ludus.
The John Hudak piece is taken from the double cassette release "Transcontinental Collaboration" assembled by Sterile Garden + Les Horribles Travailleurs. And apologies to listeners for the abrupt ending of the programme as the chap that follows on from MuhMur Radio came in and decided to turn the CD off. Accident or sabotage?
Take a listen.
https://www.mixcloud.com/muhsteve/muhmur-radio-soundart-radio-04082016/ (copy + paste).