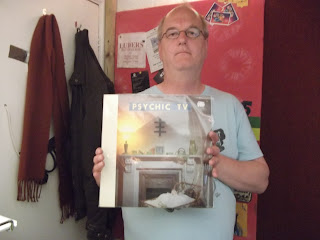 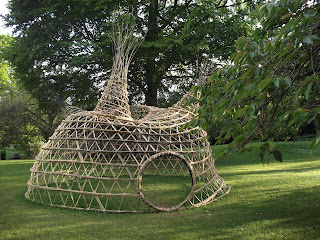 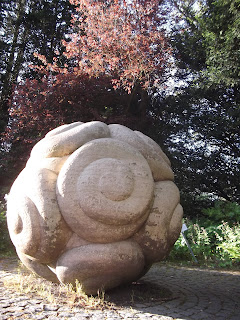 Sultry summer nights at Dartington Hall. Beautiful. Using public transport (the 149 Country Bus Service) to get to the Soundart radio station means I have a couple of hours to kill before starting the programme. Usually I'll sit and chat with Dave (Mutch, the engineer / producer / ships captain) and drink a little, but these summer nights are ideal for taking a stroll around the estate gardens ... They put deckchairs out on the lawn to enjoy a drink and read - I finished off reading the excellent "Noise Receptor" magazine.
So, onto the programme. No session or exclusive this week ... with going up to Lincoln and trying to start to make sounds for Berlin on the 13th, I played it safe and just played a few of my favourite records, put them in my bag and made my way to the bus stop kind of thing ...
I have the show downloaded onto my computer but I am still having a problem uploading onto Mixcloud. Hopefully this will be rectified soon.

The next show is on June 13 and will feature mainly cassettes as the show will be pre-recorded and I will have access to a working cassette player. June 13 sees me travelling North to London for the flight to Berlin. A link below means I have cracked the uploading problem ...
Thanks for listening. 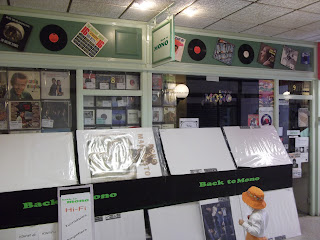 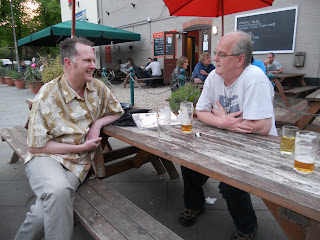 Another one of my stealth and mistral trips to the East Midlands, I was there over the recent Bank Holiday weekend catching up with old friends and visiting the parents .... Being a Bank Holiday weekend (unfortunately) there weren't that many shops open, just the usual tourist trap houses...still, I managed to pick up a copy of the "Street To Street - A Liverpool Album" compilation LP on Open Eye Records for pennies from a charity shop.
The only secondhand vinyl shop I could find was closed, so I cannot give a full report - but at least Lincoln does have a secondhand vinyl emporium. Back in the 1980's secondhand vinyl in Lincoln meant Andy Dobbs' stall on Lincoln market and Mary's on Broadgate, Mary's closed in the mid 1980's and along came New Kid On The Block Vince Ramsey. First with a shared shop with Andy on Tentecroft Street before moving to Hungate and opening "Planet Of Sound". Andy moved to the Sunday market near RAF Scampton. By the turn of the century a few secondhand record shops had come and gone but Vince was still about with his "Planet Of Sound", now moved to the Gowts Bridge area of Lincoln. I was recently told that Vince had closed shop and gone onto EBay selling, but this is unconfirmed.
And there endeth the brief history of Lincoln's secondhand record shops.
"Back To Mono" is a large shop in "The Mall" a small indoor shopping precinct situated at the bottom of Steep Hill (or at the top of the High Street depending on from where you approaching). Old Lincoln folk might remember this place as "The Mini-Market". There were Cabaret Voltaire and The Specials record sleeves on the walls, but as the shop was closed I couldn't comment on stock variety or price - but if you ever are at a loose end in Lincoln, I am certain the shop'll be worth a visit.

Pictures.
1: "Back To Mono" shop front.
2: Meeting up with Britannia Anonymous Society (aka Mick McDaid) at The Vic on Union Road.
Posted by Steve at 12:09 No comments: 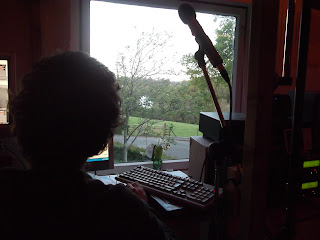 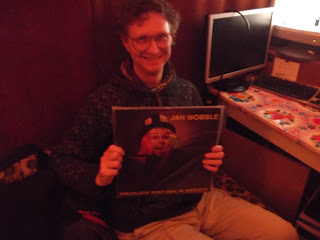 Another show that went rather well ... Unfortunately I am still having problems uploading the broadcasts up on to Mixcloud, but if I find a way I will put the link up beneath the playlist. The programme is downloaded onto iTunes on my computer it is just Mixcloud saying it is "corrupt". Still, the programme can always be heard "live" by tuning into 102.5FM if you are in the South Hams and Torbay area or by logging onto www.soundartradio.org.uk and click on "listen now". Programmes are broadcast every alternate Thursday at 9pm GMT. (Although the previous programme is likely to over run by a few minutes ... it's not me spinning the proggy mountain high tracks)!
There was no "session" for this show so I dug out some old Muhviertel recording and gave it an airing, an unreleased piece from 1987 recorded at Silencer Studios in Lincoln and featuring Schuster on Drum Machine. It was lovely to watch the sun set over the Estate grounds, with the smell of the wild garlic and bluebells permeating the air. I do like Dartington at summertime.

Pictures:
1: View from the studio,
2: Dave (The Engineer) with his "request spot"!

Have spent a pleasant while listening to the latest release from Bulgarian project MyTrip. I have been listening to MyTrip for the past couple of years, their first release was a great split cassette with Costa Rican "noise" project EUS and since then I have kept an ear on their output. Each release is an upgrade in quality in sound, approach and presentation.
"Scattered" has four pieces spanning from 2009 to 2011. "September Nothing" starts proceedings, a five or six (great band) minute piece of vibrations blowing in the wind, rising, falling, separating. "I Am Abandoned" begins with footsteps and disappears into an alien landscape. The sound is very low level, hardly ever rising above the earth...it drones and scrapes along. Side 2 is most powerful. "I Am Cancer" evokes the sound of Lustmord and Inade (beat less). It has a "lost in space" or journey to the abandoned planet feel. The whole tape has a Sci-Fi soundtrack feel. Tarkovsky would find MyTrip useful. The cassette ends with "Abstinence Insects". A highly menacing drone, dark gourd like blowing interrupted by irritation...scrapings and scratchings, and then it is all lifted onto another plane by a celestial choir. Magickal stuff. Sat listening I am reminded of the Dave Phillips live performance at the Extreme Rituals Event last year.
MyTrip is the solo project of Angel Simitchiev (he is also a part of the excellent Zev Died Orchestra). "Scattered" is a C25 cassette released by US label Worthless Recordings. It is limited to 50 copies and comes with a small 12 page full colour booklet with art work by Lulia V and words by Angel. It costs about 8 dollars from the label. www.worthlessrecordings.blogspot.com, seriously worth a listen.
Posted by Steve at 22:31 1 comment:

I have become reacquainted with a single from my youth ... one of my favourite singles.
Last weekend I travelled to a small village in the Cotswolds to visit a long lost school friend, an old flat mate from Lincoln. He got in touch a few weeks ago - the world wide web is a wonderful thing - and a meeting was arranged.
Mentioned many times on this blog, Mark Collins still has his record collection from the past 35 years. Despite moving between Lincoln, Sheffield, London, Kenya and Bristol he has managed to keep hold of his vinyl and tapes. (He never lived in Hulme!). Sitting there in his house thumbing through his old seven inch vinyl boxes was like being back in his bedroom circa 1979. Some of the records were mine...had my writing on them. Apparently I used to give away records back then, I was a generous soul in the old days.
In return (On Returning) Mark handed me a mint copy of Phones B Sportsman 7"EP "I Really Love You". I have been hunting for this beauty for many many years.
Phones was a member of Swell Maps. The sleeve stipulates "No Maps" and rather like the Steve Treatment "5 A Sides" EP I don't really believe it. The "A Side" is sandwiched between songs on "Side B" whereas Side 2 contains the title track of the EP. Confused...you will be.
"I Really Love You" is a tuneless Elvisesque crooning ballad, the title is repeated over and over - a declaration of intent. The B Side begins with "I Woke Up This Morning", a short piece that collapses in laughter and Phones shouting "Shut Up Jowe! This Is My Single". "Get Down And Get With It" follows, this is the A Side. A hot rock n' rollicking Johnny Moped style slice of pub blues. It is a band playing live....which is why I find the "no Maps" motif hard to believe. Back to the B Side, and the next song is "The Wah Wah Track". Phones introduces the song: "This Is About The Things That Mean The Most To Me". He then travels around the studio picking up and playing a variety of instruments whilst claiming "I Like To Beat Up Little Girls. I Like To Beat Up Little Boys". I had totally forgotten how brilliant this single is. "The Olton" is the final track and is a 20 second bass line hidden in "The Wah Wah Track". I did say it was confusing.
Meeting Mark (and his family) has been a great highlight of 2013, and getting to hear this EP again is the cement amongst the fence. If you ever see this record hiding in some secondhand vinyl emporium - buy!
Thanks Mark.

Can You Tell Beer From Beer? 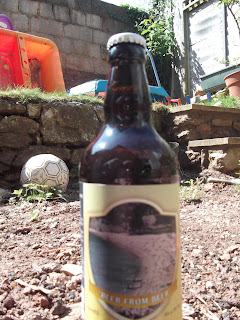 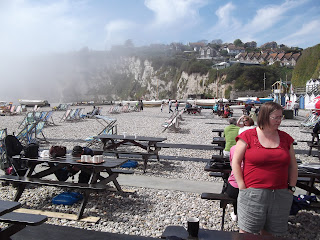 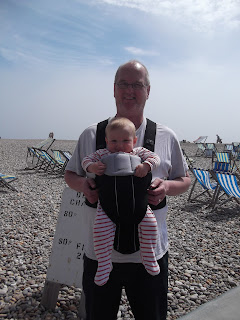 I spent a lovely day in the East Devon village of Beer. Admittedly there is little to do other than eat, drink, swim and get a suntan but if you are down in the Devon area and surround it is worth a visit. Beer is part of the "Jurassic coast" and the beach is all pebbles (like Brighton).
First arrival I had to get all the Beer jokes out of my head .. there was Beer Pharmacy (I'll have some Holsten Pils please), and Beer Antique Centre (A pint of Hofmeister please) etc .. but one thing that has to be sampled is Beer from Beer.
Beer From Beer is brewed by the Mighty Hop Brewery based just down the road in Lyme Regis. It is one of the plethora of micro-breweries that seem to exist in Devon and Cornwall. It is 4.7% proof. The blurb on the bottle claims that it has a gentle hint of caramel and orange. I must say that I didn't get the orange but there was definitely a treacle edge making it all a bit "mealy" as we folk from Lincolnshire say. It didn't taste remarkably different from other "local beers" I've tasted whilst being here. A tad flat!
Beer From Beer is available in 500ml bottles and cost me £2.50 a bottle. A bottle is all you'll need. 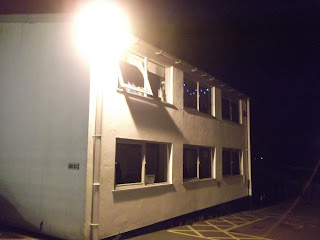 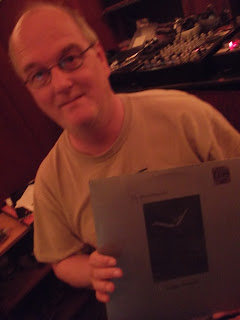 Another broadcast, another lovely walk through the Dartington Hall Estate gardens to get to the station. The pub inside the grounds (The White Hart) has been refurbished and now resembles a trendy city centre niterie than the good old fashioned country inn that it used to ... I will have to stop by Morrison's now on the way in for liquid refreshment!
No exclusives or sessions on the programme. I still have a great piece by Grey Park to play but still the studio cassette machine has not been fixed!
Playist:

Thanks alot for listening, and big thanks to Dave Mutch the engineer (and whose voice can be heard in the background)! The next programme will be on May 16, same time same channel. I will upload the programme onto MixCloud - barring any hitches some time over the coming weekend. 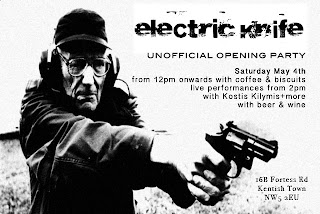 There's a new shop opening in London this Saturday. If you live in London or are just passing through please give the shop a visit.....
Posted by Steve at 15:04 No comments: