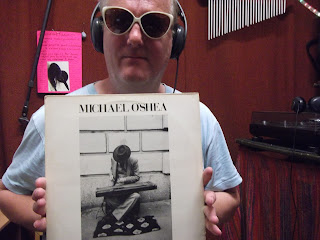 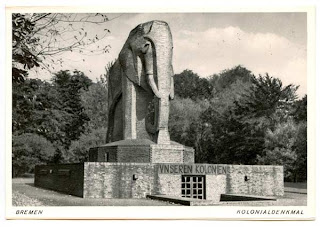 Dieter Muh will be performing inside The Elefant (Krypt) in Bremen on October 12. Also on the evening will be performances by Swiss artiste b*tong and Troum ... more details to follow. (There will also be a performance in Hamburg around the same weekend).
Posted by Steve at 15:16 No comments: 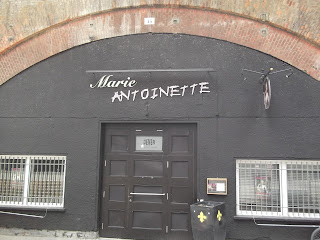 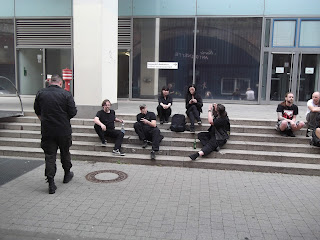 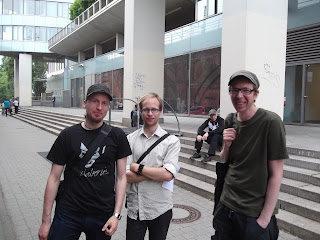 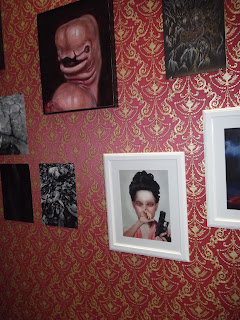 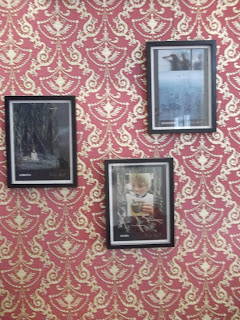 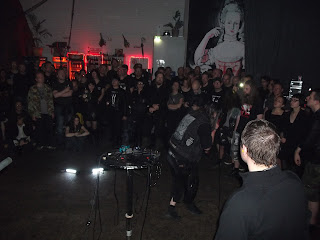 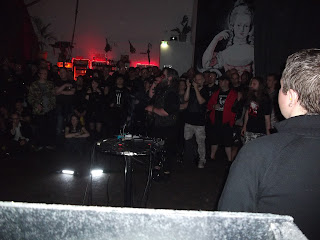 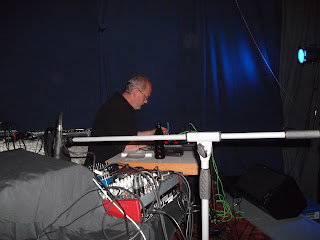 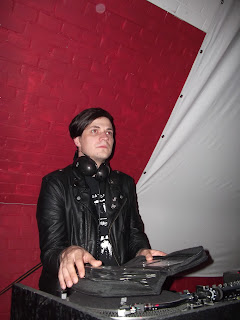 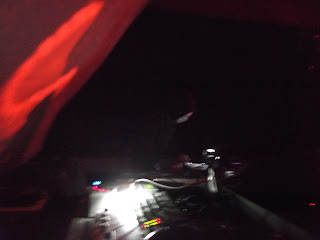 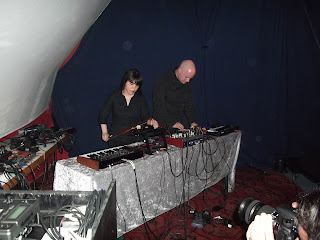 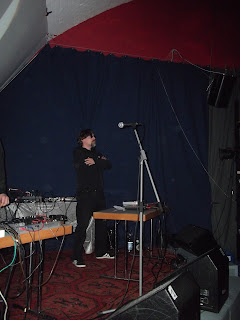 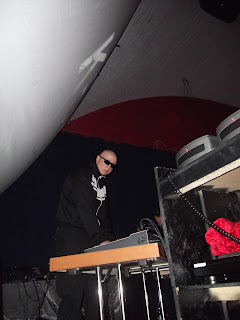 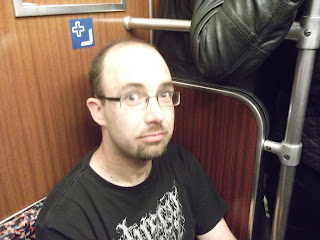 The 49th performance by Dieter Muh took place at Marie-Antoinette on June 15 2013. The club is a railway arch situated under the Jannowitzbrukke train station at Alexanderplatz, Berlin. The event was the "Epicurean Escapism Event" curated by Stefan Hanser of Anemone Tube.
I do like Berlin, one of my favourite cities and this was one of my favourite Dieter Muh performances. The evening started with a video presentation by Mike Dando. He read out a statement explaining what we were about to witness. Thirty years of Con-Dom films, from experimental collages on slides to Super-8 films and TV mash-up images. As Mike repeated the statement over and over with minor adjustments on emphasis and minutiae tweaks on vocal effect the films began to roll before an onslaught of Con-Dom soundtrack. Stunning stuff, it works! A whole new avenue and aspect to the work of Con-Dom. I asked Mike where the idea came from, to present his film work in this way. The idea was Stefans', so congratulations there for spotting the possibilities.
Trepaneringsritualen followed. A high energy set with Thomas stalking the "dance floor". I heard "Judas Goat" and the performance ended on (what to me sounded like) a reworking of "Discipline". Louder and more focused than the gig he did in Exeter last April - excellent to see.
Dieter Muh followed. Hypnotische Dreamworks - that was my plan. Escape through trance - looped and layered. I was totally satisfied with the sound and hopefully it will be uploaded on the Internet soon - maybe you tube. There were plenty of folk recording, and it felt like being mobbed by the paparazzi when I first sat down on stage! I was approached after the set by some guy saying that my sound reminded him of Astral Social Club. A fine compliment.
Anemone Tube gave a precision soundtrack to the Austrian film "Angst" creating some fantastic drones with scraping metal, flute and Tibetan percussion. Compelling. Post Scriptvm also filled the venue with a wall of manicured noise. It was good to see a project playing instruments instead of laptops, all the way from New York too. Impressive. Highlights of the sound was Liana's use of the violin, created a great sound .. apparently their theremin broke on the flight over, that would have been interesting.
Where there was once Anenzephalia now there is Ke/Hil. Powerful possession of pulsating power electronics. The sound is not too far away from Anenzephalia, what "seemed" different was Klaus seemed more involved in the vocals. Stunning sound, gripping visuals I had to buy the "Hellstation" CD straight afterwards.
Philipp Strobel of German label Aufnahme & Wiedergabe provided the tunes between sets. As ever when outside the UK, organisation and sound was excellent. I love Berlin.

It was great to meet some old friends, great to see Ville and Heikke in Berlin - all the way from Helsinki, and Daniel & Mario from Rumpti-Pumpsti (I just had to pop in on Saturday - making me late for soundcheck ... ). A meet and greet drinking session took place on the Friday night, getting to know you as Julie Andrews once said. Finally got to chat to Chris Groves of Cipher Productions (all the way from Tasmania) and Wim from Silken Tofu.
Hats off to Stefan and his band of helpers for organising a memorable evening / weekend. A great night out.

There are clips of performances up on You Tube as I type (no Dieter Muh yet) - just type in Epicurean Escapism in the search bar. Also some pictures of the evening are up on Flickr - much better than mine! 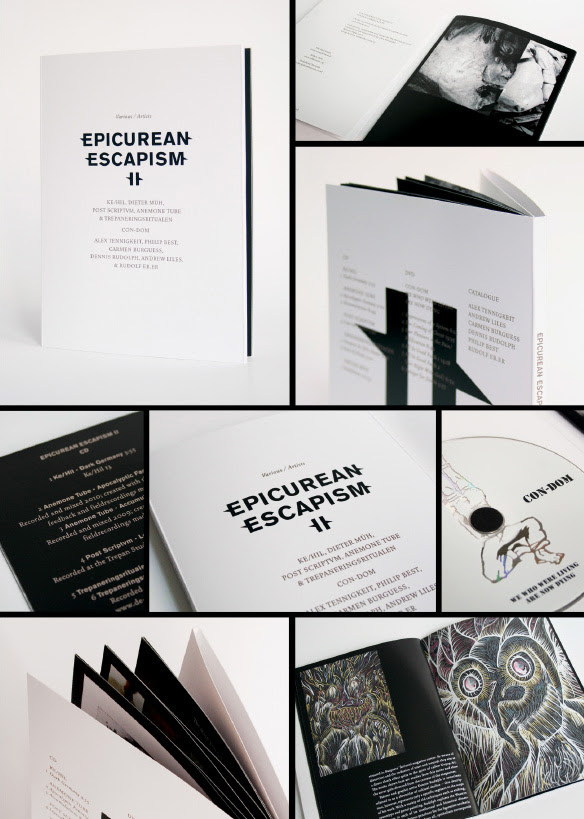 The compilation CD album "Epicurean Escapism II" ill be released on Saturday June 15. The album features exclusive material by all those performing at the Epicurean Escapism II Event in Berlin this coming Saturday. Also in the release is a DVD of films by Con-Dom.
Go to www.transformed.de for details on how to get a copy - or turn up on saturday night!
Posted by Steve at 15:26 No comments: 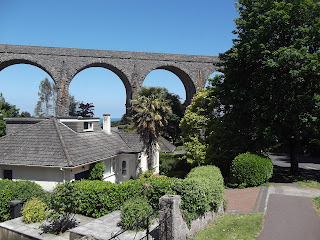 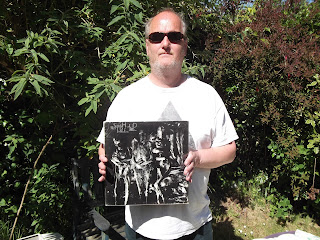 The next MuhMur radio programme is  broadcast on the 13th of June. Thursday, 9pm. It is available to listen to on 102.5FM in the Torbay/South Hams area or streaming live on www.soundartradio.org.uk on the ol'Internet. It is because I will be Berlin bound on the 13th that I pre-recorded the show at a secret location in Paignton today.. at a studio that will now be known as "The Last House On The Left".
Due to the fact that I will not be there to ramble on and mumble down a microphone, this programme has no "chat" - it is 100% sound! (Enjoy). The programme has its' regular features, there is a classic from the new wave era in the shape of "Otto M" by Clock DVA and on this day features a track from the Nurse With Wound album "Insect & Individual Silenced" which was released on June 13 1982. There is also an exclusive track recorded especially for "MuhMur" from Finnish masters Grey Park.

Thanks go (again) to Dave Mutch for fine engineering and editing the programme.

Pictures.
1: En Route to the secret location.
2: Relaxing in between tracks! 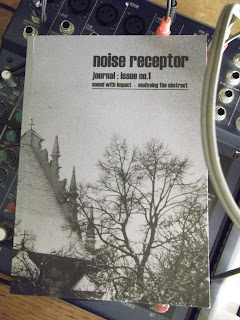 I have just finished reading the excellent new magazine "Noise Receptor". A new magazine in the arena to compliment "As Loud As Possible", "Night Science", "Terror", "Special Interests" and "Turbulent Times". "Noise Receptor" is produced by Richard Stevenson in Australia. I remember the name from when he used to edit "Spectrum"back in the 1990's, an archive of which is still available on the Internet at www.spectrummagarchive.wordpress.com - well worth a browse.
"Noise Receptor" started as a blog, but as I am not a great sitter downer at the computer and read about noise kind of guy I've never discovered it. I like physical product! Issue number one concentrates on Trepaneringsritualen with an in depth 10 page interview covering the concept of TxRxP and his releases as well as touching on his previous projects (Dead Letters Spell Out Dead Words) and talking about the Belaten label and distribution. The magazine also has artwork by Thomas Ekelund spread out between the pages. It is a fascinating and unputdownable read....
Twenty Eight pages are dedicated to reviews - good in depth reviews, but 28 does seem to be a little OTT. Richard states that he sees the physical magazine as an "in depth" interview + reviews appendage to the blog..but 28 pages is rather a lot. Of course there are the TxRxP release reviews (which could have gone directly after the interview ... maybe with a full Thomas Ekelund discography?) and some interesting new names to discover. Abre Ojos & Desiderlil Marginis being top of the list. Richard seems to mainly review releases from Malignant Records + Force Majeure, but that is OK - both labels release fine stuff!
The magazine is 56 pages thick and limited to 200 copies. (They are numbered). They cost 10 Australian dollars direct from www.noisereceptor.wordpress.com or in the UK from Peripheral Records, who is charging £12 (which seems a little steep to me). I got my copy from Belaten - with a load of cassettes to save on postage.
If you like Trepaneringsritualen and the work of Thomas Ekelund this magazine is essential. 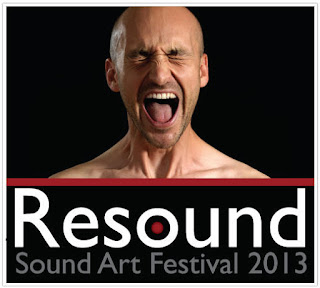 Interesting things happening in Cornwall this month. On the 7th of June Nigel Ayers and Alice Kemp will perform as part of the "Resound" Festival. The event is FREE and taking place at the Acorn Theatre. Alice will be presenting "Decay & Persistence" from 6:45pm in the foyer. There is a soundtrack to the performance available on the excellent Fragment Factory label soon. And in the evening (from 9:20pm) Nigel Ayers will be performing live in the theatre itself. Essential.
On the Saturday (8th of June) Alice Kemp will be performing in the Acorn Theatre from 7:00 pm. Again, entrance is free.
If you're daft enough to have a facebook account, there's an event page with "line-up" there.
Posted by Steve at 09:51 No comments: