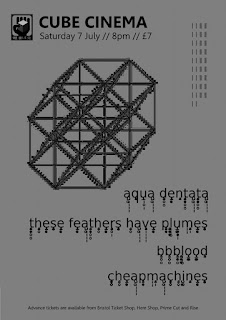 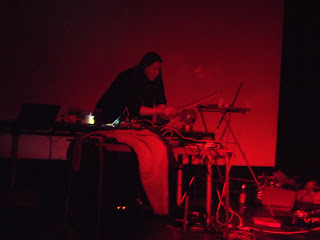 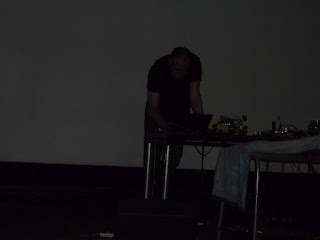 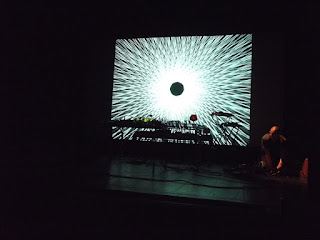 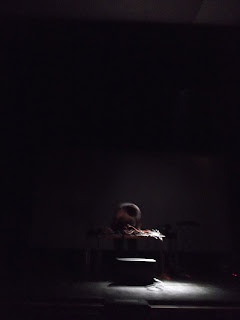 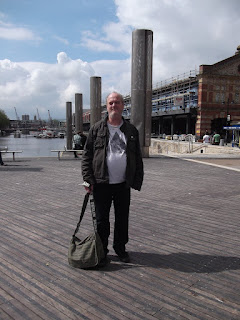 On a mild but wet evening in the centre of Bristol a small corner of North London came to entertain. When I first heard about this gig I thought it must be a Beartown Records evening, but apparently not - just a group of friends getting on the 4:50 from Paddington to Temple Meads and bringing their art to the South-West.
The Cube Cinema is a small cinema (a cineplex when Dieter Muh played there a few years back with Putrefier + Stimulus) in the Stokes Croft area of Bristol, a beautiful venue and ideal for the four performers. Compact and bijou and seated.
I have been getting the releases of all four projects for the past couple of years, with each of them releasing some of the most essential (to these ears) sounds and to get them playing in the same venue in one evening was just too good to miss.

These Feathers Have Plumes kicked off the evening, with bowed glass and laptop. A sound that filled the small venue beautifully...small problems with the acoustics at the start were soon ironed out and Andi performed a great piece of drone music. Cheapmachines performed next with a quieter experimental piece from Phil Julian. I had warned Tamsin (the present Mrs. Cammack) to bring earplugs for Phil's set...but they weren't needed. Cheapmachines provided a set in three parts. A static live performance with the sound of hums and vibrations crawling around the buildings interior walls before creeping up behind and attacking the senses, moving into a dark space with tweaks and rumbles. Sensory deprivation. The final part sounded like a treated sample of a badger trying to escape from a large metal barrel, again an almost binaural experience was achieved..excellent stuff. I believe ennui set in as Phil moved and attempted some circuit bending electronics. Best Cheapmachines live set I have seen.
The brilliantly named Aqua Dentata followed. Aqua Dentata performed to film. It did surprise me somewhat that the performers were playing a cinema and only one had brought along visuals, the opportunity of visual equipment is rare enough these days and to get to project on a "cinema-sized" screen is too good to pass. Aqua Dentata performed a slice of minimalistic drone, layered textures of electronica to a great hypnotic piece of animation, a stark black and white pattern shifting film that put the two words solar anus into my head.
BBBlood completed the great evening with (again) a quiter assault than anticipated. With a sound that isn't too far away from that of Putrefier Paul performed with a table of effect boxes, contact microphones and sample loops for just under half and hour. The longest BBBlood live set to date? Hard to describe other than all consuming noise. 20 odd minutes in the world / mind of the Baron Bum Blood. Excellent.

All four artists are regulars on the London "circuit", I recommend you catch them all soon. If the evening lacked anything it was audience and a set from Duncan Harrison.

The following morning I made it down to the Bristol Harbour for a breakfast pint and a stroll amongst the book stalls and secondhand record stalls~where I found a mint copy of Ada Wilson's "Tattoo Hosts Vision On" LP. Now is that the name of the album or band?