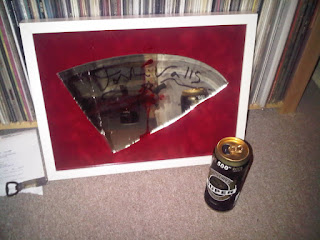 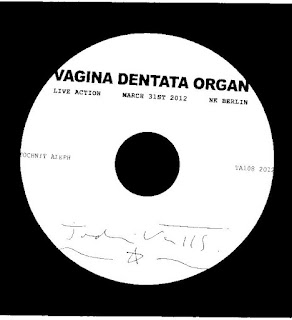 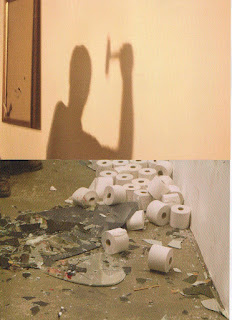 Back in the April writings on this blog I mentioned the Vagina Denata Organ performance at the NK Gallery in Berlin, I described the action and the effect. Thinking about it I reckon that the performance was "probably" one of the best live shows I have ever been to over thirty five years of going to live gigs. Certainly top ten possibly top five...and now Tochnit Aleph Records have released "Allegory Of Cosmic Violence". A 12 minute CDr featuring the whole Vagina Dentata Organ performance in beautiful crystal clear stereo. Rarely a recording captures the sound of the venue, the event, the sense of being there, but this release captures the performance beautifully. The CDr comes packaged with five photographs from the performance along with a "Hyper Cylindric Cross" drawing / action score print signed by Jordi Valls. These items are glued to the back of a frame housing a piece of bloodied mirror signed by Jordi resting on a blood red velvet background. An art object.
This was the kind of thing I was expecting as the "momentum" item that was available on the night of the performance. The TNB/VDO 12" vinyl and "art-piece"... only it wasn't ready for the evening, and only available weeks after the event. Don't get me wrong, the TNB/VDO box is a fine release and a must, but this release is special...it captures the evening superbly. "Allegory Of Cosmic Violence" is limited to 21 copies (and I know where 5 copies are) and available from Tochnit Aleph only. www.tochnit-aleph.com
I also hear that The New Blockaders are releasing the recording of their performance on the night, coupled with the performance from the "Never Say When" festival in London. Shall be interesting as Berlin was the finest I have seen and heard TNB play whereas London, May 2012 was probably (no...definitely) the worse. It will be interesting to see the packaging....