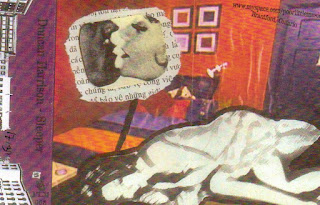 Have just spent a pleasant while listening to the latest release from Plurals main-man Duncan Harrison. "Sleepers" is a cassette limited to 30 copies and released by the Canadian label Poor Little Music.
To bastardize an old Gary Clail lyric "fi-how lo can you go"? This tape is lo-fi in extremis, but (in a strange way) I think it adds to the sound. There are words being spoken at the moment on the Troniks forum board about badly dubbed tapes, old tapes from the mid 1980's being sold as new and in the day of digital enhancering and re-mastering onto CD / digital format folk just aren't prepared to put up with tape hiss...fair enough, I bought some cassettes from a label called Strange Rules recently that were really badly dubbed and it hindered the sound ... but here (I think) Duncan uses the fact that the recordings are to be a cassette release and uses the medium perfectly. Side A contains two untitled pieces. The first has a drone, a hum with occasional pots and pans as percussion. There are sounds of broken leads, bad connections - the sort of snap crackle and pop that makes you think that the tape machine is on its' last legs...the second untitled piece has resonance. Chime bars amidst the murky swill. There are voices in there too. There was a point where I thought, jeez - this label will release anything the recording is so bad and then there's the sound of a dodgy connection, muffled and inaudible spoken words like reading the pages of an old dusty tome and it becomes brilliant. Perfect. If it sounded "clean" (or digital) it wouldn't work, it wouldn't be so disconcerting or haunting. Why make films in 3D?...is football better in HD?
Side B starts with "Jealous People". A glorious murky swill where a bass rumble acts as glue, sticking the M25, whale sound, stretched tapes and EVP together. It all ends suddenly. The tape ends with a 2009 live performance in Westhill. Where the fuck is Westhill? It is an audience recording - sounds like a live performance of side A condensed into 15 minutes. There's a master drone, metal percussion and tempered feedback. Voice is used to add to the haunting ... did I say haunting? I meant performance. It ends on a ghostly breeze..unfortunately the tape ends before the "wild" applause. This piece just makes me feel like I have to see / hear / experience a live Duncan Harrison performance before I die!
Buy this tape.
Poor Little Music is a label operated by Fossils member Rob Michaelchuk from Ontario. Bizarre as the CDr I was "getting in to" before endlessly spinning this tape was the Altar Of Flies/Fossils split CDr on Hasten + Korset. Go to www.poorlittlemusic.110mb.com and bag this beauty.
Posted by Steve at 20:51