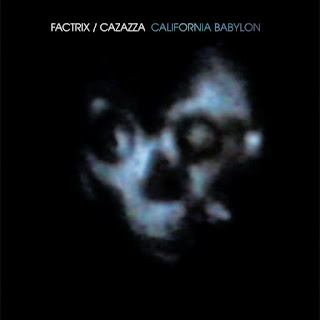 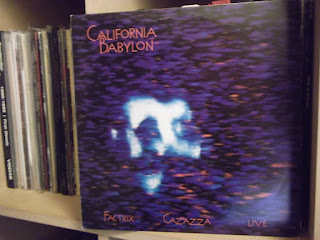 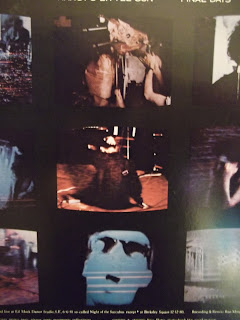 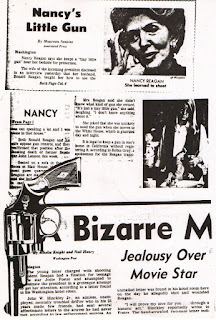 I very rarely buy CD re-issues of vinyl albums, especially vinyl albums that I already have but "California Babylon" by Factrix/Cazazza is one of those exceptions to the rule. The CD re-issue comes with a DVD of the "Night Of The Succubus" performance from which part of the album is culled, and previously only available through stills on the original album cover. I don't think the video was ever commercially available - and if it was it would have only been on NTSC format thus rendering it useless to me. The CD also includes five unreleased Factrix songs from 1981 ... but it was the DVD I was after!
Released back in 1982 on Subterranean Records "California Babylon" is a fantastic document of two live performances where Factrix and Monte Cazazza collaborated. Back in 1982 Monte released "must have" vinyl mainly due to his history of collaborations with Throbbing Gristle and his work as an artist within Survival Research Laboratories. Industrial kids of the 1970's bought Cazazza and I was certainly one of those, travelling 40 odd miles to Nottingham and Selectadisc Records to get a copy. The original LP came with an insert - art collage to accompany the song "Nancy's Little Gun" and a poster. The re-issue has neither, which is a shame.
So was the film worth 30 years wait? Hell, yes! The live performance filmed in a dance studio, perfectly shot with interruptions from Charles Manson and footage from the San Francisco Peoples Temple..."The Nursery"...ticking all the early 1980's boxes. I have lived with "California Babylon" for 30 years now, know every sound - and to see it being performed is beautiful, and I get to see what the "Monochord" strings are. Monte is credited as vocals, strings (monochord). What we have is a body of the guitar, no neck, hit through and echo effect. A slight disappointment is the pointless animal carcass robotics from Mark Pauline, tagged onto the end of the live set like some sort of after thought.
A pity that the DVD didn't also have film from the Berkeley Square gig that features Z'ev and Tana Emmolo-Smith, their version of Brion Gysin's "Kick That Habit Man" is a highlight on the album.

Back in the day I always associated Factrix with Tuxedomoon and Chrome coming out of San Francisco at around the same time...This re-issue is on the Superior Viaduct label and they've also re-issued the one and only Factrix studio LP "Schientot". This CD features a booklet with an essay by Julian Cope.
Well worth hunting out. www.superiorviaduct.com