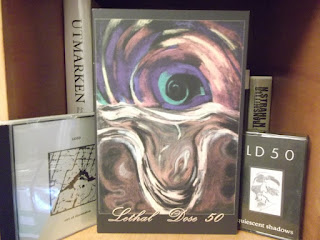 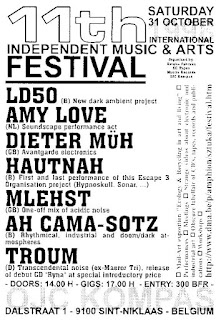 Have just spent a pleasant while listening to LD50 and their last release ~ the CD "21st Century Awakening" on Nuit Et Brouillard. (Cat no. NB CD 05). I saw the album floating around secondhand and cheap on discogs a couple of weeks ago and thought I'd give it a listen. I like LD50, or Lethal Dose 50 as they are called here. I first came across them in 1998 when we shared billing at the 11th International Independent Music & Arts Festival in Sint-Niklaas, Belgium. It was a great evening and LD50 gave a great set using equipment that we (as Dieter Muh) had once used. Roland JD800 and Drumatix if memory serves, so their sound was similar to early Dieter Muh...only dark ambiance approached from a different route (if that makes sense). I got their "Out Of Dimension" CDr there and then.
I am not too certain whether or not LD50 are still active, they are a hard one to find on the Internet, it did surprise me that this album was released in 2006.
"21st Century Awakening" with sleeve quotes by H.G.Wells is sixty four minutes of soundscapes. Ten pieces in sixty four minutes. The sound is purely electronic. Synthesizer, keyboards, electronic rhythms and pulses and voice samples. The style (the genre) is dark ambient, dark ambient electronica a la LOKI Foundation with a slice of Kraut 70's progressiveness thrown in. It is an album of two halves, the first four pieces are too busy, too much happening in too shorter time, pieces are not given time to breathe or settle. Each track has an excellent part - the titular piece with its' compass readings for example - but it is all hurried along. I notice that this album features a third member for the first time. LD50 were always Stefan & Tom, but this album also credits Bernard Herstens as a member...has this made the sound too busy? Also the levels seem to be "all over the place", I was thinking the album was probably cut direct from cassette, but there is a mastering credit. Christian Renou (AKA Brume)....
By track 5 the album didn't have much going for it and then it all changed. "Dose IV.v.586" is a great slice of post nuclear ambiance. "Anti Dose IX.s.265" has a great bass lead rhythm and hand clap..the track moves at a great pace. Faith is restored. Tracks five through to ten would have made a great 12" mini album. I think the artwork is bloody awful though.
I'm glad I spent time and money and bought this album, but I'll stick to "Out Of Dimension" or "Quiescent Shadows" next time I want to hear LD50.

So, are LD50 still active? Have Stefan Scheers and Tom Adam moved on? It has been six years since this release. I know Nuit Et Brouillard are still active~I've just bought the Maison Close CD on their Force Majeure label, but what about LD50? Can anyone please answer?