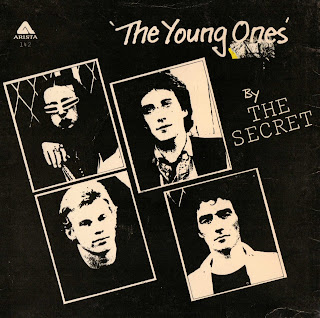 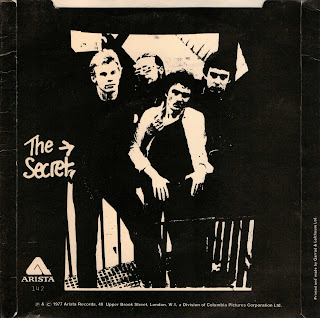 In the last few days (great band) there has been some great releases arriving at Hartop Towers. The Column One "No One" Box Set on 90% Wasser, ESP Kinetic & Storm Bugs LP's on Harbinger Sound and the Club Moral "1981-1986" Box Set on Vinyl On Demand label to name a couple but the piece of vinyl that will not leave the turntable at the moment is "The Young Ones" by The Secret.
I originally bought the single back in 1977, lost it in the "burglary that dare not speak its name" in 1983 and have been after a copy ever since...I found a copy at "Wax Factor" in Brighton last weekend, in picture sleeve too which is a bonus as I never had it in picture sleeve originally.
The Secret hold a special place in my (h)ear(t) because they were the first "punk" band I ever saw live. It was either late 1977 or January 1978 that I witnessed The Secret support XTC at Nottingham Polytechnic. The first gig I ever went to was Judas Priest (supported by a then unknown and unsigned Magnum) at Lincoln Drill Hall. I am not counting watching Tab Street Gas play Lincoln Odeon in between cartoons at "The Saturday Club" when I was pre-teen and in love with Scooby Doo & The Partridge Family! XTC/The Secret was my second live gig. I struck a deal with a couple of my friends, Mick Campion and Dave Risebrow that if they came with me to see XTC I would go and watch Judas Priest live in Sheffield in 1978 (I think the "Stained Class" dates had been announced). We travelled by train from Lincoln to Nottingham and caught a bus to the venue - I think I better state I was 15 at the time. It was soon found that both I and Mick could get served watered down lager in plastic pint pots we continued to get drunk. Three 14/15 year old drunks amongst 50/60 odd polytechnic students.
The Secret were all drainpipe trousers, short hair and fast punk songs. The singer was called Benny Leopard and was dressed in leopard skin trousers whereas the guitarist, Shrink, was dressed in a silver foil suit with green and red hair and Elton John style glasses. He played a flying "V" guitar. I loved it. I joined a small pogoing crowd at the front of the stage. Mick and Dave kept their reserve and stayed at the back of the crowd. At some point in the set The Secret played "Handel A Vandal". The song included a chorus where Benny lunged his microphone into the unexpected faces of the front row to reply to his question "You Can't Handle A"? Of course the unexpected voice replied "Vandal"! Benny worked his way along the front row until the mic' was shoved into the face of the guy stood next to me and his response to "You Can't Handel A Vandal" was "FUCK OFF" and Benny retreated to the back of the stage thus curtailing my chance of entering punk rock show business and shouting down the microphone of Benny Leopard. Gutted.
By the time XTC came on stage it was time for us to leave to catch the last train to Lincoln. Whilst Dave went to the loo for one last desperate piss I watched XTC play "Science Friction" then left......we missed the last train and I had to phone my mother to come and collect us in the early hours of the A.M. in her old battered Austin A40.

The B Side of "The Young Ones" is "Handel A Vandal". It is a brilliant single. Really fast, really "tinny" and .... pub rock. It's like when I have re-purchased stuff by The Stukas, The Lurkers, The Depressions and The Flys what I am hearing is speeded up 8 or 12 bar blues a.k.a. pub rock! I am never disappointed.
I'll get the 45 out of my system and carry on with Club Moral.
Posted by Steve at 16:44