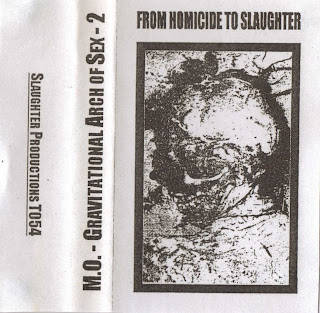 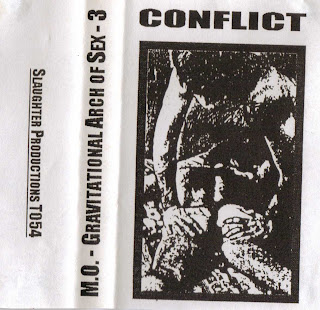 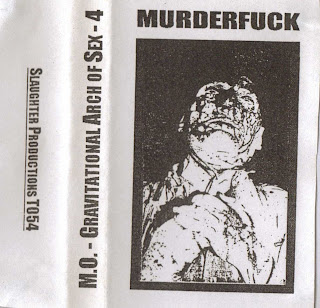 I have been working my way through the Mauthausen Orchestra 12xCassette set this week, and so far made it to number 4.
"From Homicide To Slaughter" is compiled of six tracks..three on each side. From now on we are seeing / hearing a more structured Mauthausen Orchestra sound than to what appeared on "2nd Movement". There is a lot of shortwave radio "crackle" and pink noise / white noise oscillations. Side one contains voice tapes (US Military) and high-pitched tonal frequencies. Side two (along with the shortwave radio static) contains high energy forceful electronics, fast paced stuff with Pierpaolo taking his foot off the pedal so to speak - the final track is crashing power electronics with the sound of repetitive machinery surrounded by howling electronics. Making notes whilst listening I just wrote "Grinder".
"Conflict" was originally released in 1983 on Aquilifer Sodality and re-released in the UK on Broken Flag Records. Side one is a strange play as it has Non littered throughout, probably a live tape or the Mute Records "Rise" 12"EP from 1982. Strange but true. Side two starts off slowly with a 5 note sequencer pattern surrounded by lovely tones. Ten years after and this would be classed as "Illbient", this leads into random synth noodlings before a section from a live performance - I am guessing the "live performance" bit by the loud amp buzz and murky sound. Side two finishes with the sound of a plague of locusts altering the dial of a shortwave radio set. Excellent stuff - sudden end, but highly enjoyable and a sound more suited the the name.
"Murderfuck" was also released in 1983. I can tell now that Pierpaolo is listening to a lot more electronic material as the sound becomes harsher and more direct. "Murderfuck" reminded me of Ramleh from the same period and "Lustmordekay" album. Good stuff, but not as grabbing as "Conflict" side two.

I shall carry on my playing after my short sojourn to Brighton & Lewes.
Posted by Steve at 19:54