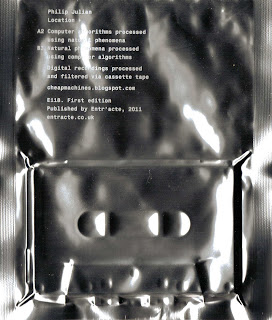 I have just spent a pleasant while listening to "Location +", the latest release by Philip Julian (AKA Cheapmachines). "Location +" is a cassette release by London based label Entr'acte and like most Entr'acte releases it comes vacuum wrapped in tin foil. I am not a big fan of this style of packaging, it has a certain beauty that has to be (somewhat) destroyed to appreciate the goods and I can see the thought behind this, but I'm still not a big fan. Bruce Gilbert's 1995 7" "Instant Shed Volume 1" released by Sub Pop Records was my first vacuum packed record - I didn't like it then, and I don't like it now. Strangely enough the work of Bruce Gilbert is evoked in this release. Side A plays like an installation accompaniment. A sound for a MOMA. "Computer Algorithms Processed Using Natural Phenomena" is textural tones, the sort of sound that accompanies film of ascending and descending objects, of coloured film and random gesture, the sort of sound that follows you around an installation or exhibition of Scandinavian Art. Again, back to Bruce Gilbert and the sound has a very "Sahko Recordings" feel. The B Side is more cut-up. The same textures but this time they are coming thick and fast and jumping across the spaces.
I am uncertain as to whether or not Philip is keeping his minimalistic glitch textural tones type work for his own moniker whilst saving his "noisier" stuff as Cheapmachines...like Mark Durgan does with his solo and Putrefier projects....or whether Entr'acte approached Philip for a solo release, but it is an idea that I have been toying with for some time - to drop the Dieter Muh moniker and carry on as Steve Cammack or split the releases/performances depending on what is required.