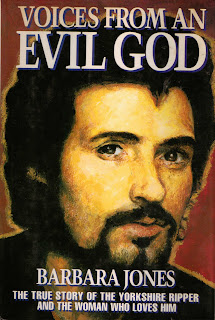 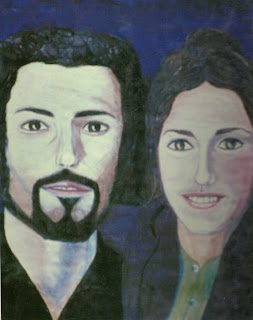 Last week I found the book "Voices From An Evil God" by Barbara Jones in the hospital charity shop for a pound. Hardback copy, first edition. I pondered over it for a while and then thought.... mine. It has been a while since I have bought a book like this but the selling point (apart from the price) was the fact that this was Sonia's Story, and the book included interviews with Peter Sutcliffe from inside Broadmoor.
Back in my youth I collected and devoured books on serial killers, mass murderers and social misfits. My interest was in the dark side of the human condition. It is hard to sit here and say why or how this was the case but the stories of The Moors Murderers and Charles Manson came to my attention (probably) via Throbbing Gristle lyrics and their "Industrial News" tract and fascinated me from then on.
The story of the Yorkshire Ripper became part of my life because at his time I was living in the North of England and his crimes saturated the local news bulletins. For a short while I thought it was my (then) next door neighbour Mr. Evans, well they did keep going on about how The Yorkshire Ripper could be the man next door!
Shortly after the arrest and trial of Peter Sutcliffe for the crimes of The Yorkshire Ripper" out came the paperbacks written by a group of Red-Top tabloid journalists. I bought them all "The Yorkshire Ripper" by Roger Cross, "The Yorkshire Ripper Story" by John Beattie. Again, I found reading about this man fascinating...at the same time (1982 onwards) I was reading books by Colin Wilson about sociopaths and killers, "In Cold Blood" by Truman Capote and whatever I could find on The Moors Murderers and Charles Manson. When I moved to Manchester in 1983 I made a visit to Southern Cemetery and by 1985 I was living in Sheffield and I tried to find the spot where The Yorkshire Ripper was arrested. I used to visit a dealer called "Stuttering Matt" (he neither stuttered or was called Matt but loose talk costs dealers) and he told me where the spot was...but it looked nothing like the picture in the books. 1985 and I bought David A. Yallop's "Deliver Us From Evil". A masterpiece of writing. I was still in Sheffield at the time and I remember sitting on my bed for a weekend and reading it from cover to cover. Now the story of The Yorkshire Ripper became my "Mastermind" specialist subject. It was in the summer of 1985 that I wrote a couple of songs based on the murders of Peter Sutcliffe. "Halifax" appeared on "Dead Meat Packaging Korps"; a cassette album I released under the pseudonym of The Streetcleaner, and "On Mission" which I.B.F. performed live and released a "disco-mix" version on the cassette album "Hammers Used As Hearts". (Both released by Carnifex Rekordings....note the Special K). It was also around this time that the crimes of Donald Neilson came to the fore through the excellent book by Brian Masters; "Killing For Company".

By 1986 I was back living in Hulme, Manchester and I found a strange cassette book in a corner newsagents in a back street of Moss-Side. Packaged in a video box were two cassettes and the cover proclaimed that "Inside find the truth about the Real Yorkshire Ripper". Ahhhh a conspiracy theory, a police cover up....I had to buy. "The Real Yorkshire Ripper" by Noel O'Gara named an Irish lorry driver as the real ripper and that Peter Sutcliffe only committed 4 of the crimes. Classic conspiracy stuff, and I love conspiracy theories!
By the trail end of the 1980's my interest in serial killers, sociopaths, outsiders etc had wained a little. The floor of my squat was littered with back issues of "True Detective" I'd bought cheap from Paramount Books in Shudehill. I stopped buying the books.

So. For a pound I bought "Voices From An Evil God" by Barbara Jones. Hardback copy, first edition (1992). The book itself stinks of old tobacco. Each page is nicotine stained and reading a chapter is like smoking 10 Park Drive and having a chug on a pipe of St. Bruno. I had to wash my hands after each reading! I read the book in six days, which for me means it must be a good read. (I am a notoriously slow reader). It was great to go over his story once again, relive the crimes and become reacquainted with the names again as it were. The author struck up a friendship with Sonia Sutcliffe so she could get an "exclusive" for her paper (The "Mail On Sunday") or a book deal and then fell out with her as she found out A: She didn't really like Sonia, and B: She was being manipulated by The Sutcliffes.
From what I can surmise Peter is a nice honest kind of bloke who was under the spell of voices that made him kill, the voice of God told him to kill prostitutes-and he did, and that person was the Yorkshire Ripper (a non-de-plume that Sutcliffe hates) not Peter Sutcliffe, Peter is a kind, warm, do anything for anybody person - the person that Sonia married.
There's stories of escape attempts, Sonia's Greek holidays and her court trials...but in the back of my mind is the knowledge that he is "probably" not The Yorkshire Ripper, rather like Al Qaeda didn't bring down the Twin Towers and Osama Bin Laden was killed earlier this year in his Pakistan apartment.

I have brought Peter Sutcliffe back into my world after 20 or so years, and unless there is some great revelation in the foreseeable future it will be longer before he does so again - don't expect a Sutcliffe paean on the next Dieter Muh album.
Posted by Steve at 19:30