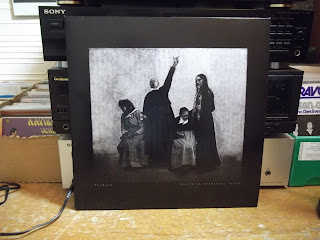 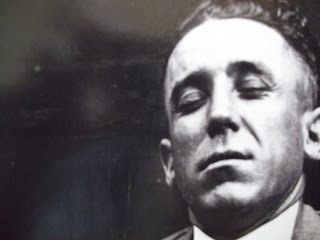 I have just spent a pleasant while listening to "Imagining Perpetual Tower" the debut vinyl album from Plurals, released earlier this month by Dead Pilot Records (not to be confused with Dead Sea Liner Records or the crap dub/rock band Black Star Liner..a band with whom I once had a huge argument with backstage at York Arts Centre in the late 1990's...but that's another story) catalogue number DPRLP01. The album was released to support the recent UK tour with Nadja (Aiden Baker).
I like Plurals, one of the best live sets I have witnessed in a long time was by Plurals, at Wattsfest in Devon last summer. Side one of the album reminds me of this set. "Exorcist's Limbo" is drone music, it sounds like a live studio recording with no overdubs, it has a raw edge to it all - not comfortable somnambulistic drone like Lull or owt like that, no, Plurals supply the real deal. The sounds heard in the exorcist's limbo are of scraped and bowed strings, keyboards, gourds, oscillators and voices. A journey is created and a trip begins...marvellous stuff. Side two is a track called "Legs Like Apparitions". It has a similar structure to "Exorcist's Limbo" but whereas no one singular sound is heard throughout side one, side two is electric guitar and delay effects. There is a pulse, a throb, and a drone in the swirl but the electric guitar is prominent.
Guitars are like marmite to me in this situation, especially when it is played "raw" like on "Legs Like Apparitions", it can work or .... It's not as off putting as some Nurse With Wound or Karl Blake when he played guitar with Tactile but I do prefer the guitar (in drone) to be used as a sound source rather than an instrument - does this make sense? There are great moments in this piece, the use of a cassette Walkmans is genius and it ends with a beautiful wall of bowed electric strings and looped acoustics.
The artwork (uncredited) is superb.
The LP is limited to 200 copies (I think) and available from www.deadpilotrecords.co.uk and (I should expect Second Layer Records in London). I bought my copy from Edge World in Brighton. An essential piece of vinyl.