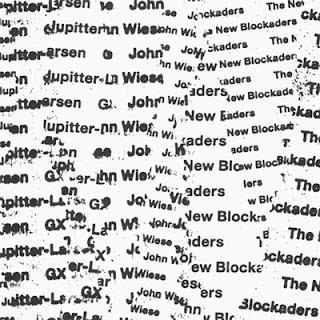 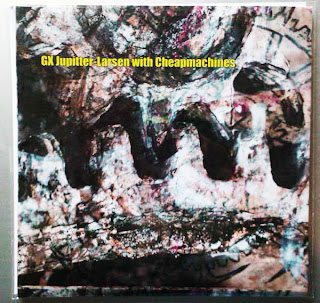 The work of GX Jupitter-Larsen (or Castrol Jupitter-GTX as he is known at Hartop Towers) has been part of my aural consciousness since the early 1980's. It was most likely to have been Dan Plunkett of ND Magazine mailing me over tapes from Texas that I first heard The Haters. In 1986 I appeared on a compilation album with The Haters (amongst others) and ever since I have kept an ear out for their (his) work. I haven't bought everything, that would border on stupidity! but I have a few choice releases, the stuff I have heard and liked and subsequently bought and random stuff I have chanced upon. I managed to get the limited Flexi-Disc "Fuchait" from a shop closing down sale.
2011 has been a prolific year so far for GX. and has seen the release of three mighty collaboration singles. The collaboration 7" with Muennich I have mentioned earlier, but shortly after the release of this single came "Rip Off", a 7" on the American Helicopter Records label. "Rip Off" is a collaboration between GX, The New Blockaders and John Wiese. "Rip Off" is the sound of tearing paper. Open microphones, contact microphones record the sound of paper. It is hard to say whether or not the sound is treated in any way or just multi-layered. There is the sound of kerfuffle and some off-mic' grunting...but it is a great artifact and slice of entertainment. A couple of years back I bought a CD by The Hafler Trio called "Where Are You"? The pitch of this release was that it includes sounds originated from the voice and blown instruments of David Tibet recorded in 1982. Sounds interesting...so I bought. The album sounds like a microphone picking up wind, or one of those plastic tubes that you swing about to make a whooshing sound. It is not a bad album..it is very listenable but just doesn't do what it says on the tin (so to speak), "Rip Off" does.
September saw the release of the collaboration with Phil Julian (AKA Cheapmachines). "Continuous Tunnel Clock" on Anarchymoon Recordings. This 7" sounds more like a Haters single of old. No hint as to what speed I should be playing this slab o' beauty so I have been mix and matching. "Continuous Tunnel Clock" sounds better at 33rpm, it becomes a great sonic bass wall of noise, a full 360 degree sound. "Self Propelled Wrinkle" is best at 45rpm. High speed wreckage, sonic collapse. Exquisite noise. An error at the pressing plant limited this 7" to 100 copies only - on yellowy/orange vinyl.