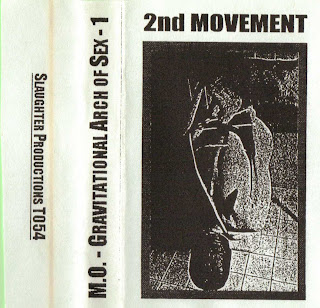 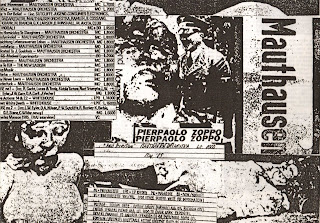 With the forthcoming Broken Flag festival just a few months away I thought it about time to reacquaint myself with some early 1980's Power Electronics and industrial music. I don't have the Vinyl-On-Demand Broken Flag Box Set so I have to make do with old tapes that haven't seen the light or a cassette machine for many a year. Sometime in the late 1990's Steve Underwood (of Harbinger Sound) kindly gave me a copy of Mauthausen Orchestra's 12 tape release "Gravitational Arch Of Sex" originally released in 1995 by Italian label Slaughter Productions. Slaughter Productions being the label run by the Atrax Morgue folk. Although not yet listed as a participant in the festival it would be a great shame if Mauthausen Orchestra didn't appear, they did do a couple of excellent tracks for Broken Flag compilations in 1983/84. "Gravitational Arch Of Sex" is a collection of early 1980's cassette releases.

For those who do not know, Mauthausen Orchestra is the moniker of Pierpaolo Zoppo who began making tapes of electronic noise in 1982 releasing cassettes on his own Aquilifer Sodality label. Whether or not he has anything to do with Italian power electronics band The Sodality I do not know...perhaps someone can tell me?
"2nd Movement" is the first cassette in the box set. Two long untitled pieces cover each side. The sound is not harsh, vicious or that powerful. The sound fluctuates between shortwave radio interference and various synthesizer sounds. Bubbling sounds and helicopter rotors litter the pieces. A lot of the sound is improvised and structureless. Pierpaolo experimenting with sound. Interesting enough to make me want to carry on and play all the tapes and dig out the "Kiss The Carpet" 10" I've got but have only played the once in 12 years! (I remember being non-plussed).
With Mauthausen Orchestra I think it is a case of the name and accompanying art work being stronger than the sound at the time.