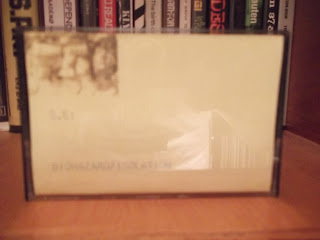 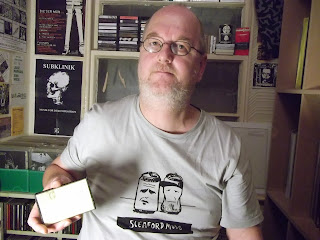 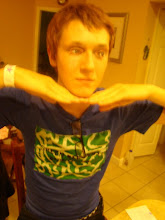 There have been a few great re-issues released this year, Small Cruel Party triple CD set on Harbinger Sound and the box sets of "Rising from The Red Sand" and Un-Kommuniti on Vinyl On Demand, as well as the CDR of Nocturnal Emissions live at Brixton Ritzy Cinema in 1983 on We Can Elude Control spring to mind - and up there with them is "Biohazard/Isolation" by Shame, Exposure.
Shame, Exposure was the project of Port Huron, Michigan musician Paul Steinborn. Paul later went on to join Skott Rusch and Lon C Diehl and form Hunting Lodge. Shame, Exposure only appeared on cassette compilations and one cassette on S/M Operations. This is the S/M Operations tape. I didn't know about Shame, Exposure until seeing the name mentioned in the Hunting Lodge box set booklet that came with "Shadows Out Of Time '82-'83" (Vinyl On Demand). "Biohazard/Isolation" is a C60 cassette split into two halves … "Biohazard" sounds like a live recording. Initial copies of this release did come with a 14 page booklet that probably explained recording spaces and track titles etc … but more on that later … Three pieces on Side A that have the distinct "Hunting Lodge" sound of "Nomad Souls", the seminal LP released by S/M Operations in 1984 and re-issued by Side Effekts a year later. It is mainly in the synthesiser sound and tape splicing technique that this is most evident. Track one has the ghost of "God Loves The Rock Stars" about it whereas track two has the drilling synth, tape cut-ups "In the name of jesus" and metal percussion that was so much the Hunting Lodge sound back in 1984. Four pieces on Side B. The first with clean oscillating frequencies, dark synth waves and cheap beatbox that has a sound of early 1980's Italian DIY cassettes and Broken Flag releases. Track two is a live  excerpt of metal percussion and sequencer - plays like a "Nomad Souls" out-take. Two instrumentals finish off the side with the last, a slow funereal paced piece cutting off mid-flow - which is a shame.
A great tape that deserves to be heard - especially if you are an admirer of early 1980's post-industrial sound - Lustmord, Test Department, SPK, Portion Control, Die Form etc. Dark areas are explored here.

But "Heres The Rub" as both Shakespeare and Wishbone Ash once said. Despite being limited to 100 copies and still available at the touch of a button on the Green Record & Tapes web site you will (almost as sure as shit stinks) not get a copy. "Biohazard/Isolation" cassette by Shame, Exposure is a tape I should not own. Released last summer and advertised on the Maniacs Only forum board, I paypal'ed my 18 dollars for a copy (with booklet) but over the coming weeks nothing was sent. So I fired off a few E Mails asking if the tape had been posted etc, but no replies. So approaching cut off time (for getting my dollar back) I gave Green Records & Tapes 24 hours to respond, which they didn't so I filed a claim with PayPal and got my money back. Then came the witless and abusive E Mails from Green Records & Tapes owner, a guy called Knox Mitchell. Knox laid into me with venom, telling me what an annoying fuck I was and that he's been in hospital with a hurt wrist (insert own punchline here) so he couldn't respond to E Mails and I should never have filed a claim with PayPal but seeing that I did he will make sure I never get a copy of the tape or even hear it. Fast Forward to October and I ask my good friend Mark (Idwal Fisher) to buy me a copy, the tape is still for sale and I gathered the wrist of Knox should be on the mend … by the end of November Mark was filing for a PayPal claim as no tape was forthcoming and Knox had not responded to Mark's E Mails. I thought it was time to get in touch with Hunting Lodge and let them know that Knox Mitchell was "ripping off" folk with the attempted sale of the Shame, Exposure cassette. Hunting Lodge were easily contactable via Facebook. Skott was totally unaware of what was happening with the release and was kind enough to mail me one of his artist copies with a copy of the latest Wolf Eyes / Hunting Lodge split live CD! Problem was that the cassette was totally blank. There are possibilities that Knox is just sending out blank tapes. This really pissed Skott so he got in touch with Jeff Chenault (label owner and friend of Hunting Lodge) who mailed me his copy .. which is the copy I have now…the copy in my hands in the photograph above .. the copy I should never own…

It is a great tape, just a shit and a shame it was (un)released by a complete amateur. I posted the fact that I was "ripped off" by Knox Mitchell on the Special Interests forum board and lo and behold out came a few more folk saying this guy had ripped them off over tape & vinyl releases and secondhand effects boxes.
Apparently there are dozens of Shame, Exposure cassettes in Paul Steinborn's possession and hopefully they will be released by some reputable label.