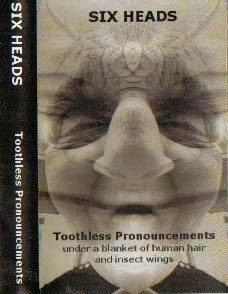 Hartop Towers is William A Davison central at the moment. Whilst he was in the UK last month playing at the Colours Out Of Space festival in Brighton he mailed a package of his latest releases and now I am slowly devouring and savouring them all. His Six Heads project is a sextet of improvised sounds brought from unconventional places. Last years album "Cardboard Oracle" on Wantage Records & Tapes was a highlight of 2012. 2013 brings "Toothless Pronouncements" a C30 (could be C35) cassette on Readymades Tapes.
Improvised music with six folk … dangerous proposition as each person tries to grab their sound. That doesn't happen with Six Heads. Each piece is allowed to breathe and grow "organically", each listen brings something new to the ear. It's wonderful stuff. Side A is "Harmonica Solo In A Black Bean Sauce/Necretized Organ Favourites. The sounds are built from harmonica and organ, and there are guitars, chains, de-tuned radio and tape splices all in the swill. A great vocal sample loop of : "I know who did it"….."Who did it old lady" ends the piece. Humour is large in the work of William A. Davison either with punnery in the titles or samples. Check out "The Popeye Scat" tape. Side B of this tape brings "Cartoon Crematorium", a ghostly incidental soundtrack with tuneless banjo plucking and a looped back beat. It all ends in a symphony / cacophony of cartoon noises and special effects.

If I did album of the year lists Six Heads "Toothless Propositions" would be on there.
There's no contact for Readymades Tapes but go to www.recordism.com and travel around the world of William A. Davison.
Posted by Steve at 14:42