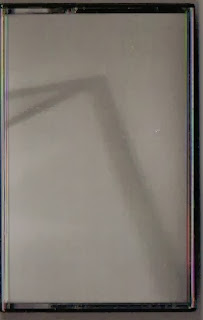 "Not What I Expected" as the great Crispy Ambulance once said. A new brace of releases from one of the finest Swedish labels, Belaten, included a collaboration project between Joachim Nordwall and Mika Vainio.
I am not that familiar with the work of Mika Vainio, I haven't heard any of his releases in nigh on twenty years. Bits & pieces pop up here and there and I did have a copy of the Panasonic / Alan Vega album on tape, but I wasn't keen. Way back in the 1980's Mika used to correspond with a friend of mine called Dave. They met through the Bill Nelson Fan Club. Dave and Mika swapped cassettes etc, he had a project called Corporate 09, they produced an album on the To The Finland Station label. It was good stuff, then Mika either joined or formed Sahko Records and with Ilpo became Panasonic / Pan Sonic and the rest (as they say) is history. Mika mailed me a copy of his 1994 CD "Metri", minuscule electro glitch stuff..then there was a collaboration with Noto, again sparse and "glitchy". Then Mika and Dave stopped corresponding so I never heard anymore…..
Joachim is an artist I have only been "getting into" recently with his Alvars Orkester and Skull Defekts projects. I have yet to hear something by Joachim I don't like … Well, until this release.
"Monstrance" is a re-issue of a 2013 CD originally put out by Touch. Recorded in one day in a Berlin studio in 2010. To my knowledge this is the second re-issue put out by Belaten, earlier this year came the excellent Sutekh Hexen "Monument Of Decay" double cassette. As mentioned, the sound is not what I expected.
I was expecting electro, sparse dance beats twitching through distortion and loops. Belaten have been releasing some fine electro-pop, dance beat, post punk tapes in the past. The sound of Panasonic meets Alvars Orkester.
Seven tracks that play like sketches, unfinished and in some cases half-hearted ideas. "Alloy Ceremony" kicks off with prepared piano before moving in to a throbbing electric bass guitar pulse and free-form electric guitar that dips and builds on feedback. First impression was of Psychic TV and their "Themes" work but then it didn't do anything…thoughts of Skullflower and Total. Second piece is similar with its' buzz saw tone and guitar feedback. Track three "Midas In Reverse" is made of bells and strings through a multifarious amount of effects in reverse. Fast editing gives it a sound of chance. "Irkutsk" ends side one. I think "Irkutsk" is Scandinavian for "filler".
Side two opens with "Prasedymum". Guitar and vibraphone. (There must've been one hiding in the studio). This is bland. It ends like a track from a Pete Bardens conceptual album from the 1980's. It begged the question - is this experimental "noise" for folk who read The Wire or Mojo magazine? "Promotheium" had to be fast forwarded until it came to a Hammond Organ drone piece with tempered electric guitar feedback.
A release that should never of happened - or maybe have been a CDR that was passed amongst friends … A shame as expectations were aroused. The first glitch in an otherwise outstanding catalogue of releases. (And a reminder why I don't listen to or buy Touch stuff). Also released was a cassette by Johan G. Winther. Yet to play this one…I think there was a Proiect Hat side project called Wintheer - I wonder if they are related?