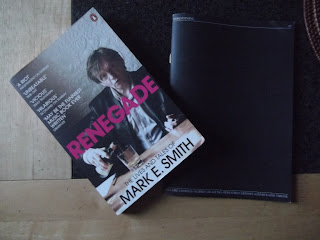 I have spent the most of June reading a couple of tomes. One good, one bad. Well ... "Renegade:The Lives And Tales Of Mark E. Smith" by Austin Collings is not a bad book per se it is just not the book it says it is on the cover.
I already have a couple of books on The Fall. "The Fallen" by Dave Simpson and "The Fall" by Mick Middles & Mark E. Smith and they are good reads but this book is simply boring. I did read the bulk of the book whilst waiting for trains and planes in London (leave the capital) so it was more out of necessity than "I can't put this book down". (If you know what I mean)? I found the book for a couple of quid in Torquay Oxfam, bargain. The front of the book screams; "A Riot" (Independent On Sunday), "Hilarious" (Scotland On Sunday) and the classic "May be the funniest music book ever written" (Observer). OK, I'm ready for a roller coaster ride of joyous bon mots and merriment. I am afraid to say it never happens. Mark E. Smith just proves to be a cantankerous old curmudgeon with tales of petty rivalries and a distaste for his admirers. There are no tales of hilarity, the jokes (of a practical nature) seem cruel - happy memories leave a bitter taste...I suppose. I like The Fall, I have a few of their releases, I have Fall "stories"myself but I am one of those folk that Mark doesn't like - I like the old Fall, the Fall of Riley, Burns and Brahmah. I have not read such a bad book since Hugh Cornwall's "A Multitude Of Sins".
Once, whilst out drinking, Steve Underwood of Harbinger Sound Records told me that the day punk rock died was the day Marc Riley left The Fall or the day he realised that The Boomtown Rats weren't the real deal....he forgets. Steve is interviewed in the Swedish fanzine "Fordamning #2". Quite an exclusive! I remember a Freak Animal edition from around 1998/99 that had a few column inches on Harbinger Sound but never a five page spread. Again, there's a touch of curmudgeon about in the interview, but a fascinating insight in to the workings of Harbinger Sound (which is not a noise label by the way) and Steve's dislike of the Internet. The next time I meet the fella I'm going to ask him about his days as a TV stuntman ... that was new to me!
The fanzine also has an interview/overview of Ideal Fire Company and Pedestrian Deposit as well as a slew of reviews. It is a good read.

"Fordamning #2" is available through various outlets in the UK - Peripheral Records, Unrest & Cold Spring (no doubt) and Freak Animal in Finland....maybe Belaten in Sweden (?) - I should have researched...I know. "Renegade" is available in selected charity shops throughout the UK, if you pay over a pound you've paid too much.
Posted by Steve at 22:10