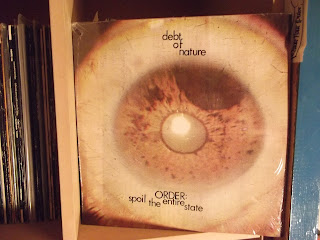 Listening to Harbinger 111 is like taking a history lesson. Document of event over entertainment. Harbinger 111 is "Order:Spoil The Entire State" a vinyl LP by Debt Of Nature. More evidence (if needed) that Harbinger Sound is not a noise label. Debt Of Nature were formed in 1981 in Los Angeles by Brad Laner. Brad was also part of Savage Republic and journalist with the legendary experimental music magazine Unsound. Jim Goodall and Spencer Savage joined a short time after. It was finding out about Jim Goodall through his work in Whitehouse twenty years ago (great song) that I first heard of Debt Of Nature, this LP cures a twenty year old curiosity. Spencer Savage is part of Dinosaurs With Horns, in fact Debt Of Nature have collaborated with many luminaries from the L.A.F.M.S. (they may or may not appear on this record). Artists such as Rick Potts, Tom Recchion, Joseph Hammer and John Duncan. Keeping in with the US West Coast scene the artwork for this LP is by ex Tuxedomoon manager and graphic designer Patrick Roques.
The LP is made up of eight five minute segments from live recordings made throughout 1985 & 1986, apart from one piece that was recorded for KKLU Radio. The sound scrapes, blurts, blows and crashes like all live "free improvisation" does. Debt Of Nature's forte is that of clever tape manipulations and shortwave radio swill, as the album progresses the sound becomes more coherent and cognitive. Less Sun Ra if you know what I mean? (again ... great song)! The last piece recorded at the superbly named Cheap Racist Gallery reminds me of an old live tape I have by the Good Missionaries, but the sound is not dated, the sound has a fresh taste still. It's great to hear old analogue synthesisers battling it out with spider sense guitar and feedback.
Debt Of Nature will appear in "As Loud As Possible #2" and a second LP of even earlier material will surface soon on Harbinger Sound. Undoubtedly limited and totally necessary the album is available from all good stockists...and Discogs. Harbinger Sound do have a Facebook page if you are that way inclined. Buy!