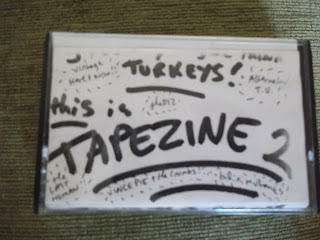 Theses days I seem to get books / magazines with CDs or CDrs attached to give an example of the sound discussed within the pages. "Night Science", "Micro-Bionics" and Koji Tano's "Noise" spring immediately to mind, but do you remember tapezines?
Digging out "Scars On Sunday" at the weekend made me dig out another Fuck Off Records release. "Tapezine 002". A compilation C60 featuring music, interviews, a short story, "jingles" and a short editorial. "Tapezine 002" was released (although that seems the wrong word) in 1981 - available through the classified section of "Sounds" and "Zig-Zag" and (maybe) Rough Trade Records and probably cost a pound (including P+P). Fuck Off Records was operated by Kif Kif Le Batter who ran Street Level Studios in London ... where this tapezine was compiled and recorded. There is a voice throughout the tape, introducing tracks, interviewing artists etc but I don't think it is Kif Kif talking, the voice (alarmingly) sounds like my producer/engineer at SoundArt Radio. Dave Mutch ... but it couldn't be, could it?
The cassette tape was such a disposable format, a tape could be wiped and re-used or simply recorded over. The early 1980's was the era of the cassette tape with Sony Walkmans and tape to tape boom-boxes being sold cheap. Well, cheap if you bought Amstrad or Realistic tape machines! I love cassettes, always have - I have thousands .. not such a disposable format.

So. "Tapezine 002" has not aged well, in fact it has become pretty unlistenable. The interesting part is the first 15 minutes or so of Side One and then it all goes a little downhill...Side One kicks off with Alternative TV (the reason why I have the tape in the first place) and a demo version of "Cold Rain". Just Alex Fergusson and Mark Perry, no flash production (a Grant Showbiz production no less) or swooping keys, a version that puts "Cold Rain" back into 1977. Excellent stuff. Nowt at all wrong with the "Strange Kicks" version but this version is superior, trust me. Mark then goes on to chat about the birth of The Reflections and simultaneously recording "Strange Kicks" with Alex as well as his disdain for Margaret Thatcher and the Westernisation of the world and the Americanisation of Britain, about living with his parents and how depressed he is in 1981. It's a fascinating interview and one that if it was in print I am certain I would have read a few times but now I am listening to "Tapezine 002" for the first time in over 30 years....does that make sense? The interview closes with "Snappy Turns" from the LP of the same name. Side One then carries on with some music. Vince Pie & The Crumbs perform  "Straight Answers" a song that sounds like Roogalator or The Tyla Gang then comes a one minute track from The 012 called "Turn The Bass Down In The Headphones".There is Bake from Glasgow who sound like Screaming Lord Sutch singing with Darts as a backing band and The Brainless Fools from Yeovil who are quite simply amateurish and awful. Side One has a "new feature" with "Subway Section" where the voice of the tapezine interviews a busker and invites him or her in to Street Level studios to record some songs. Pierrot Floridia (Yes - Floridia not Florida) is awful, there is a reason why this chap is busking - he is shite with his acoustic guitar, affected American voice and mouth-organ - where is Pierre Floridia now? Side One ends with a short slice of synth pop by That Dangerous Age. A track called "Down", I don't know why but I couldn't help thinking of Ricky Gervais and his synth-pop band Seona Dancing.
Side Two features a lot of Here & Now. I don't mind Here & Now, I really like the split LP with Alternative TV. "What You See Is What You Are" on Deptford Fun City Records, I like the "Dog In Hell" 7"EP too, but here the pieces are from early Here & Now, Here & Now "phase 2", 1975. So Side Two kicks off with Crazy Alan Dogend, ex Here & Now bassist and member of The 012. One man and his acoustic guitar - open mic night at the pub around the corner. Then comes "The Editorial" where the voice tells us of a band who featured on "Tapezine 001" and another Fuck Off Records compilation cassette that have become famous by releasing a single that is topping the "indie charts" and signing to Rough Trade Records and have requested to be "wiped" from the Fuck Off Records releases but when Kif Kif refused they went to the studios and took the masters so no cassettes can be duplicated and sold. The voice tells us that if the masters are not returned soon that he will "out" the band by releasing a piss poor demo tape they had sent him. Gangster style eh? and seeing that I don't have "Tapezine 003" - who were that fucking band? Mark Astronaut & Friends sing a song about Ronald Reagan's America ... I can't help feeling that there were a lot of home knitted jumpers, berets and corduroy worn when this track was recorded. Arnold Rubenholt then reminisces about the early days of Here & Now - about early members and the good old days when dope was only £22 an ounce. The sound of an early Here & Now "jam" plays in the background before a live piece called "Soviet Commercial Radio" comes to the fore ... I am pretty certain Arnold says this was recorded in Brigg (Lincolnshire) in 1975! Musical (loose term) tracks on this side come from Hove's Concerned Christians and Funky Soul Brothers, both fucking awful. The tape blurb calls Bikini Mutants "promising" but their song "Butterfly" is Status Quo's "Paper Plane" played really badly. Out of time, tune and ideas ... Bikini Mutants, like The Brainless Fools were from Yeovil. Where are they now?  Germ Warfare feature on Side Two with a piece called "Trapped". I remember liking Germ Warfare - I think they were on some Deleted Records cassettes as well as a compilation with Religious Overdose. Germ Warfare were from North Lincolnshire.
Interspersed between the music tracks the interviews and editorials is a short story called "The Last Human" by Johnny Brainless, it sounds like an episode of "Bleep And Booster".

"Tapezine 002" played twice in 32 years and on that average I will be dead before I get the urge to play it again. I would not be surprised to find this cassette going for "funny money" on EBay or Discogs or wherever. I think it's worth about a pound (including P+P).