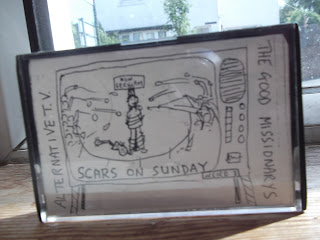 I am just about to spend a fortnight on my own as the wife and kids have gone off on to the wilds of Dartmoor with the in-laws and friends to camp, knit, quaff and worry the sheep. A life under canvas is not for me - not even two weeks. So with the house to myself I realised I could play my tapes & CD's on the downstairs hi-fi! Excellent. What to play on a bright and sunny Sunday morn? Not a real dilemma - it had to be "Scars On Sunday" by Alternative TV/The Good Missionaries. I had been meaning to dig out some 'Missionaries since spinning the latest Debt Of Nature LP a few times last week.
"Scars On Sunday" was released in 1979 by Fuck Off Tapes and was available through the classifieds in Sounds, Zig-Zag and N.M.E. (and probably Rough Trade Records in London). I think it was a pound. Back in the day - the day being 1979 - I was a big fan of Mark Perry of Alternative TV and The Good Missionaries - also his solo stuff and work with The Door And The Window and The Reflections. I (strangely) never got to see Alternative TV live. I say (strangely) because I saw just about everybody else in those days and ATV were regulars in Nottingham, Retford and Sheffield.....never Lincoln though.
"Scars On Sunday" is a live release with Side One being the penultimate ATV gig at Greenwich Theatre, London in March 1979 and is a fine example of how far Alternative TV had come and could go. The sleeve notes say that music had changed drastically since their formation, but folk still came along shouting for "How Much Longer" and "You Bastard". I remember going to see Bill Nelson's Red Noise in Retford and folk still were shouting "Ships In The Night". It happened. The gig is tense, that is obvious and it all ends in chaos as equipment is smashed a piano is tipped from the stage and the PA is switched off....it has a similar ending to the tape of Whitehouse at The Roebuck. The gig starts with a strange version of "Nasty Little Lonely", the drums are atrociously out of time and the wailing of Annie Wombat is out of place ...  third song in is the mighty "Radio Story" sliced here with "Lost In Room Poem". Classic ATV and Mark Perry at his best. "The Radio Story" is my favourite ATV song. "The terror is in your radio-oh-oh". Dieter Muh tried to do a cover version when we played in Cleckheaton with Steve Underwood (of Harbinger Sound) on Bass Guitar and Pete Bright (of Six Fingered Cousin) on shared vocals. I say tried as alcohol and stupidity got in the way...be assured that no-one will ever hear the result!  As mentioned the gig ends in chaos as the PA is switched off (total switch off) and arguments ensue between band and audience.
Side Two features three pieces by the Good Missionaries including "Bottom Of The World" from their debut live performance at the London Lyceum in 1979. Personnel is virtually the same as Side One - it was obvious the name had to change (but the songs remain the same). "Bottom Of the World" is all out improvised mayhem with slap-bass playing from Dennis "Side" Burns, the best piece on this side is "The Good Missionary Goes For A Walk" - a mammoth jam around the "Good Missionary" track - parts psychedelic, parts free jazz and parts punk ..  a great example of why Mark Perry is a genius. (I have stated this fact elsewhere on this blog). The last two pieces were recorded on the The Pop Group/The Good Missionaries/Lynton Kwesi Johnson tour of 1979. A tour I regret missing - it came so near to Lincoln (Retford Porterhouse) I still don't know why I didn't go...to this day I have never seen Mark Perry live!

In a time where all and sundry, the good, the bad and the total slice o' shite is being re-issued, re-packaged and re-sold someone should get hold of this release and make it available again. Put it in a bigger box than it needs to be in (as The Diagram Brothers once said) .. that's put me in the mood for some Diagram Brothers ....
Posted by Steve at 12:39