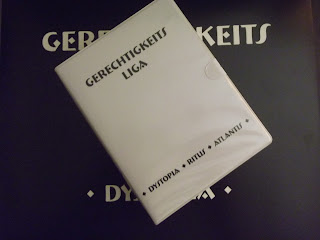 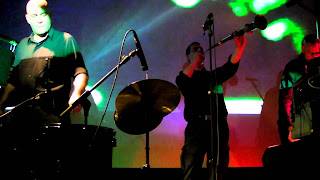 I have spent a pleasant while listening to the latest release from Gerechtigkeits Liga. "Dystopia - Ritus - Atlantis" a double cassette on the Berlin based Aufnahme + Wiedergabe label. Deluxely packaged in a VHS video box with badges and postcard.....
The first cassette (side A) is a re-issue of the 2011 vinyl LP "Dystopia", originally put out on Gerechtigkeits Liga's own imprint Zyklus Records. It does seem a little strange to re-release the LP on cassette and limited to only 100 copies when the LP is still readily available but when listening to the cassettes in one straight listening / sitting, to hear the world / vision of GL, then OK ... it (probably) makes sense.
"Dystopia" is quite a "difficult" listen. It took me a few plays to appreciate the sound, perhaps because I was expecting a sound / approach more in the vain of the great "The Games Must Go On" or "Hypnotischer Existenzialsmus". Great electronic pulses with rolling rhythms and great sampling. "Dystopia" has a more martial feel, even neo-folkesque with vocal treatments and heavy percussion. The tape opens with "Justice" - the end justifies the means cries Till Bruggermann with a sound not too far away from a Death In June LP. Tracks like "Dynamometer" and "Dystopian Dream" also carry this sound. The instrumental "Clockwork" has a post-apocalyptic soundscape and "End Of Time" reminds me of late 1980's Laibach with its heavy orchestral strings marching percussion and growling voice telling me "We Are In The End Of Time". "Dystopia" also has a couple of fillers ... little 2 / 3 minute tracks, of which "Slash" with its PIL bass/rhythm sample verges on the unlistenable. On the LP I can just lift the needle. Percussion and Zurna (an Eastern wind instrument) is provided by John Murphy.
Side B of the cassette is "Ritus".
"Ritus" literally translates as Ritual and what we have here is 40 minutes of a live recording that has taken place in a Berlin basement. The line up here is the "new" Gerechtigkeits Liga line up of Till Bruggermann and Ragnar. The sound is familiar. It is the sound of blown horns, of plastic & metal tubes. Struck metal, dirt kicked over metal plates that are contact mic'ed to the full. Synth pulses and frequencies. A ritual piece. What is most important here is the "ambiance" the sound of the space being used. Like I said, the sound is familiar ... from 23 Skidoo and their "Culling Is Coming" to Psychic TV and their "Themes" and Metgumbnerbone and their "Legaliahorn" to more recent releases by Michael Muennich, Zev Died Orchestra and the stunning Poena tape on Belaten. "Ritus" is a masterpiece. Fully engrossing from the first moment. 40 minutes is a long time, but time flies when I play this entering a new space / dimension ... mind wanders and dreams. Beautiful.
Cassette two is the album "Atlantis". Two tracks (thirty five minute instrumentals) over two sides. "Atlantis" is nothing like "Dystopia" or "Ritus"in sound. Dense psychedelic walls of noise, hypnotic electronic layers built to sound like a audio dream-machine. Of all the material present "Atlantis" is more like the Gerechtigkeits Liga of old ... Dark, existential, menacing, brooding, thoughtful and mesmeric. Back in September last year Ragnar mailed me a promo copy of the piece "Hagstice" for playtime on my radio programme, it is great to see it finally released. "Atlantis" brought to mind Origami Galaktika, Manipura and Troum.

This release is available direct from the label : www.aufnahmeundwiedergabe.bandcamp.com