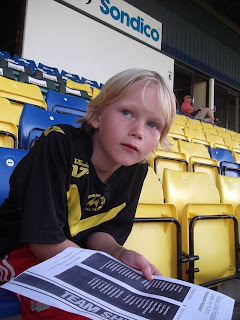 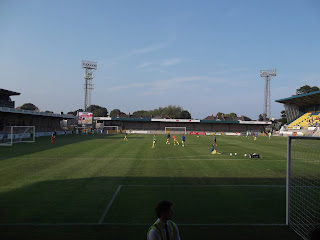 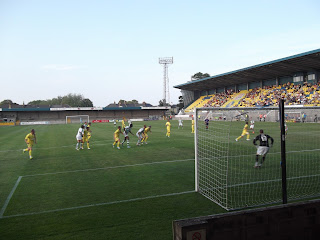 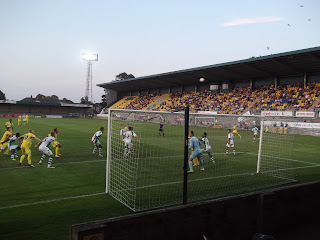 Ahhh, the pre-season friendly, the only chance for us folk that live in the ville of a lowly team get to see  a Premiership / Championship team. Since I have been down here in the South-West Torquay United have played host to such greats as Leicester City, Leeds United, Stoke City and even the mighty Nottingham Forest. 2013 saw the visit of Yeovil Town. Formerly and quite recently a team of amateurs from the Conference, but now they punch their weight and play with the "big boys" in the Championship.... Football is a funny game.
It was a balmy summer night and ideal weather to watch a football match (anything has to be better than the awful women's euro football on the BBC). Torquay charged £1 for kids and £10 for adults. Bargain. The football played was above standard, Torquay United raised their game, last time I saw them was last November with a different manager and a different squad, they lost 4-1 to Southend United, they were awful, but now they seem to have mastered the one touch and give game. It was more "to the feet" rather than "hoof and hope". Yeovil Town were slightly played off the park. I know it was a pre-season friendly but I just could not see Yeovil Town doing well against the Championship big boys such as Nottingham Forest, Leeds United, Reading, QPR etc .. they were too reliable on the long ball game. They have a Peter Crouch like striker in Michael Ngoo, but no wing play to get the ball across. Right back Luke Ayling did try, and Yeovil did hit the woodwork a couple of times in the first half, but the defence were all over the place, their captain and central defender Byron Webster seemed like a startled rabbit caught in the headlights! Stand out for Torquay United was the winger Niall Thompson, not afraid to run at defenders or get the ball in the box. Good to see.
The final score. Torquay United 2 - Yeovil Town 0, for Torquay it was a deserved win. Oscar (the family's football expert) loved it. On this display The Gulls are automatic promotion candidates and probably will be playing Yeovil Town in Division 1 in the 2014/15 season.