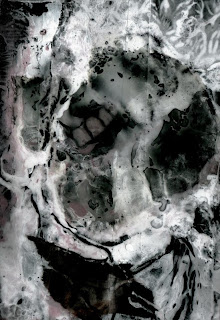 I don't think that I would ever buy a release from a project called Half An Abortion, in the valley of shite names Half An Abortion is down there. I feel the same way about Filthy Turd and Mutant Ape, I just can't see me listening to their releases because the name puts me off .. which is a great shame as the Turdster used to be a Cosmonaut who hailed Satan.
Half An Abortion reside in Leeds (rather like Filthy Turd and Mutant Ape ... well...West Yorkshire anyway) and is the solo project of Pete Cann. I have met Pete on a few occasions, first time in Exeter at the Dieter Muh / Silver Apples gig and he is a very decent chap. Decent enough to mail me a copy of his debut cassette "Anarmorphic Household Whelmer" and I am glad he did as otherwise I would never have heard his "sound". Once over the appalling name (I was in a group called Anagram Of Clit back in 1979...soon changed it though. I always think a project should have a name you can say in front of your mother) the tape is not a bad listen, a valiant first effort. Recording wise it has a touch of Duncan Harrison about it. (pink cassette too). The sound is vast, a live recording in an empty cellar with a twenty-foot ceiling.
The whole of side A is a piece called "Unraveller". Eighteen minutes long. Back in the early 1980's Z'ev performed in Derby, he had lots of pieces of metal tied to his body (pots and pans) and they were mic'ed up. The performance was Z'ev throwing himself about the stage .. and this is exactly what the first five minutes or so of "Unraveller" sound like. The vast emptiness of space give the track a dirty sound. Soiled. After the metal shenanigans the sound is of an untuned radio through a varity of effects pedals - frantic dial twiddling. Is this circuit bending noise? A high-pitched frequency noise slam? Has Pete listened to just a tad too much Putrefier?
Two tracks fill up side B. "Bewildered Squire" is a fantastic Yorkshire title. This piece is more abstract, Pete is doing something here ... but I am not quite sure what. Bottles smashed in anger, wood is sawn, metal is scraped and chains are rattled. Chaos in the crawlspace. Contact microphone madness. "A Rough Sunday" is a noise piece. Pure and simple (as Hearsay used to sing).

I am certain there are lots of cassettes like this one floating around the "noise" ether and Troniks Forum Board, and that does not make it a bad release, I enjoyed the first listen. Isabel F. (my three year old daughter) entered the room during the playing of side B and declared "I like noise" with a beaming smile, and I shall play it again...soon. I just hope by the time Pete puts out a second cassette he has changed his mind about the name.
The cassette is pro-duplicated and released on Pete's own Crater Lake label, it's a C40 with cover art by Travis Johnson - he who operates the excellent Ilse label. I'm not giving a contact address - I want interested folk to google "Half An Abortion"!
Posted by Steve at 21:23