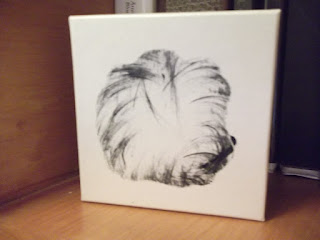 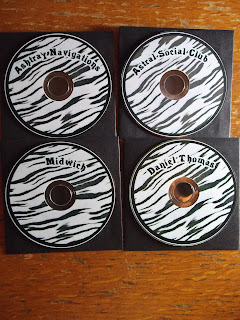 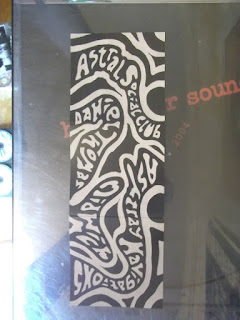 I equate the Yorkshire label Striate Cortex with Basses Frequences and Apollolaan because they take time and care over their packaging of CDr's, not just putting it between to folded pieces of paper and sticking it in a PVC bag ... no, each release is itself a work of art and for that .. more power to them. The Plurals "Six Eyes" album on Striate Cortex is one of the best packaged releases I have.
So, Striate Cortex have just put out the compilation "Victorian Electronics" to celebrate their fiftieth release, and it is beautifully packaged. Four 3"CDr's in a small box with fold out insert and a small mat with a picture of the night sky over Leeds. The compilation even had a release party in Leeds last Saturday night where all the participants played live...would love to have been there, but this album will have to suffice for us non-driving Southern dwellers.

I have been playing the discs in alphabetical order ... not as listed on the insert. That's just the way I am. Ashtray Navigations provide two pieces. "Day Of Thor" reminds me of Skullflower during their "3rd Gatekeeper" period...but played on toy instruments. There's a lot of treble (where's the beef?.....no I still don't get it)*. "Day Of Thor" is a kraut-rock-wig-out tune that ends on a field of wailing and pounded keys with guitar feedback and amp-noise. Lovely. "Wren Became A Wimpy Bar" starts off all pots and pans percussion, it has an Eastern Mantra feel with the introduction of zithery sitar guitar and shakers. It made me want to dig out my old Eric Random LP's. Admittedly the keys do go a bit "Ray Manzarek" towards the end but it keeps a hypnotic pull. I have mentioned before that I saw and heard Ashtray Navigations about 15 years ago and Phil Todd (head Ashtray) kindly gave me their "Four Raga Moods" album, but I wasn't too impressed so I have not payed too much notice, then last year I saw them live in Cambridge and they damn well blew my socks off ... too late now to start on their vast back catalogue, but I am liking what I am hearing now.
Astral Social Club provide the single piece "Sinister Depilator". Here Neil Campbell is assisted by Foldhead member and Early Hominid Paul Walsh. The track comes straight in - it is a straight jump onto the spinning carousel. A blanket of pulsing drones and wild guitar frenzy (GNP), a fantastic piece that lasts seventeen minutes and fifty four seconds and is worth listening to for the great last four seconds....a masterpiece.
Midwich provide the twenty one minute piece "Verdigris". The green moss like residue that grows on old copper coins and pipes. The piece starts with old pipes, bells, pans and gongs being hit to create a resonance. Resonance and vibrations are throughout this piece, with the introduction of a Casio keyboard drone and phazered pulse. It's not a bad piece, just (to my ears) gets a tad "new-age". The spirit of Ian Boddy.
Playing this album set in alphabetical order leaves Daniel Thomas to last and the strangely titled "Beneath It All, Desire Of Oblivion Runs". Another twenty one minute piece that starts off with tonal frequencies, high pitched...like running old computer cassettes through a pitchshifter. ("IBM" by Throbbing Gristle) The sound changes into a machine driven guitar loop which changes into muffled lo-fi sub-aqua drone which changes into sequencers.....it all gets a little lost and loses its way....Daniel is no journeyman. The weakest of the four 3"'s.

All in all a great release, worthy for the Ashtray Navigations disc alone....ASC + Midwich tracks are bonus. "Victorian Electronics" is limited to 50 copies.