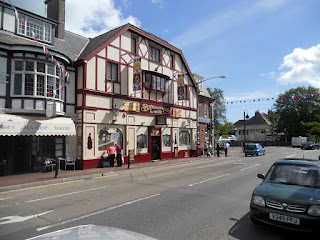 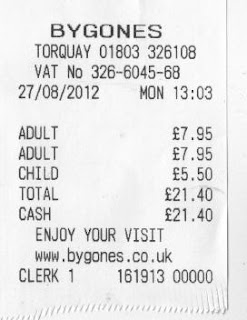 It was a rainy Bank Holiday in Torquay...(to paraphrase Throbbing Gristle's "Very Friendly")..so we decided (as a family) to indulge in an indoor activity.
Bygones is an attraction situated about five minutes walk from Hartop Towers and seeing that in the ten years that I have been living here and have never walked through its' doors , it was decided it was time to explore. That was mistake number 1.
"Something For Everyone" the pamphlet cried out...."Three floors of pure nostalgia for adults and children". Bygones is a very small building, on the day we went the place was crammed with wet and bored tourists. Crammed. Warning. Bygones is cash only, and you will need a lot of cash. It cost £21 for three folk. Two adults and a six year old. Through the doors and you are immediately in a Victorian Street. Slowly shuffle past shop windows, which children can't see into because they are too high and folk taking photographs are blocking the view. Piss poor mannequins with missing limbs and ragged wigs are inside and outside the shop. Bodmin Jail standard is a term we use nowadays. Marvel at the shopkeeper in the sweet shop sucking his till! Pass the stinking toilets (very Victorian) and up stairs to a corridor of Victorian bathroom scenes - babies having a bath and being put to bed - again, slowly shuffling as folk stop to take pictures (there is no passing on the corridor - too narrow). Now we enter the games room and "Fantasy Land". Spend £1 to get five old pennies to put into old arcade machines that do not work, or old chocolate machines that are empty but still accept old coins. Rip-Off. We got a pile of old pennies - that was mistake number 2.
The WW1 Trench was a joke. Again, piss poor mannequins dressed in clean uniforms in dimpsy lighting. Shabby stuffed toy rats littered about the attraction. We were told that this attraction was unsuitable for small children, but if they did not pass through the WW1 Trench then they would miss (or not see) half of "Fantasy Land" or some 1950's/60's toys, so they had to pass through - or lose out.
We didn't stop for a tea in the Bygones Cafe, nor peruse the gift shop. We were out within an hour of entering. Ever had the feeling you've been cheated? In the role of entertainments and tourist guide for the South-West of UK (Devon Division) I seriously recommend giving Bygones a miss. File under Bodmin Jail, and Babbacombe Model Village. If stuck, go to Berry Head Visitors Centre in Brixham - we did yesterday and had a whale of a time.