The Granary Club (The Rock Years) 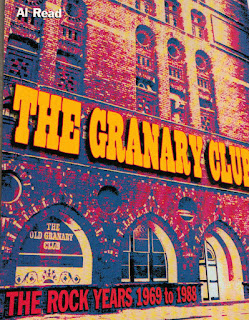 I have been back in Bristol where I managed to find a secondhand copy of the book; "The Granary Club (The Rock Years 1969-1988)" by Al Read. I love reading books on music, it doesn't matter what style or genre I just love reading about "the industry". At the moment I have just started Clive Selwood's autobiography and have a couple of books lined up for when I have finished that. David Cassidy's (ghost written) autobiography and a book on the NSK by Alexei Monroe. I think you catch my drift.
When I saw this book I opened it and immediately saw the name of A Band Called "O". Now there's a group I had forgotten all about. Their eponymous debut and subsequent album "The Knife" were staple favourites in my record collection 1973-1977! I cannot remember what they sound like (at all), but at the time I was well into stuff like Camel, Greenslade, Judas Priest and Widowmaker so ....
The Granary Club was situated in the heart of Bristol Dockland, now an exclusive apartment block, and back in the sixties it was a swinging jazz club owned by Acker Bilk and his brother Dave. In 1968 it allowed a promotions outfit called Plastic Dog to hire the club out for rock gigs and light shows (light shows were big in the late 1960's) and the whole thing exploded and soon Plastic Dog were operating (sometimes) seven nights a week and running a magazine called "Dog Press".
In the beginning there was ... Griptight Thynn and Stackridge Lemon and other local bands and musicians - such as Keith Tippett before the bigger names came to entertain, names like Caravan, King Crimson, Wishbone Ash and Lincoln's finest The Amazing Blondel. By 1970 the club was well established and the book lists the amount bands got paid. Fascinating. Slade and Curved Air were £50 in 1970, and Gentle Giant were only £30. The aforementioned A Band Called "O" got £80 in 1975 - and £200 a gig by 1977.
By 1975 Trapeze and Trickster were big club favourites (favourites of mine too), but what is interesting is the showing of "New Wave" groups such as Squeeze and Helium Kids (aka XTC). I never realised they were gigging that early. When reading the book I discovered that the owners (not the promoters) were against "punk" bands playing The Granary. They turned down The Sex Pistols in 1977, but did manage The Cortinas in 1976 - playing a benefit gig for Southmead Hospital Intensive Care Unit. Although in the late 1970's the club was promoting heavy rock, pub rock, beer + blooze type stuff a few interesting names slipped through the net. Suburban Studs, Bethnal, Rich Kids, The Yachts...even The Lounge Lizards played for £50 in 1978, but it was mainly the diet of Sassafras, Budgie, Vardis etc. Did Bristol have its' own punk club like Nottingham had Sandpipers and Lincoln had AJ's?

All fascinating stuff and it is written like a diary listing. Sometimes there are memories from the promoters written amongst the listings, and memories from local bands and audience members giving it all a great touch. My one criticism is that the pictures don't match with club nights. Promo pictures of Phil Lynott from 1980 to go with a Thin Lizzy listing from 1975 - this type of thing is rife throughout the book. It should have pictures of the bands / musicians performing at The Granary Club.
Anyway, I learnt a lot from this book, especially about mid 1970's (grass roots) rock and the history of music close to an area where I now live, and that A Band Called "O" came from Jersey (the Channel Isle, not district of New York). It is published by Broadcast Books of Bristol, compiled by Al Read and cost me a fiver.