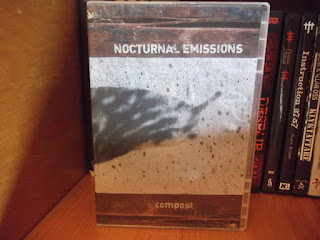 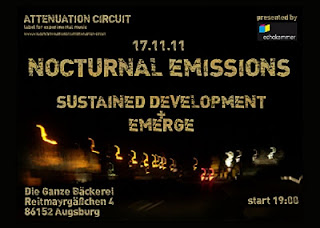 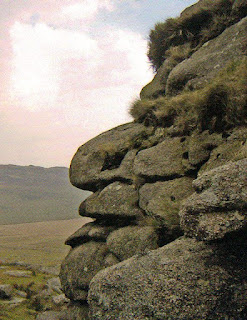 Two releases in a very short time from Nocturnal Emissions and both of them recorded live in Germany. Last month saw the release of "Spinal Correction Shred" ( very Fallesque title) a cassette release on the Emissions own Earthly Delights label recorded earlier this year in Berlin and last week saw the release of "Compost" a CDr on the Attenuation Circuit label. A new label to me but I see that they've released stuff by b*tong, Doc War Mirren and Artificial Memory Trace in the past so they may well be worth discovering.
I do like a live Nocturnal Emissions album. My favourite Emissions albums are the live ones, only last month I bought a copy of "Deathday", a cassette Sterile Records put out in 1981 recorded live in Corsham, Wiltshire. "Chaos" and "Befhelsnotstand" are very regular plays here at Hartop Towers. Although (admittedly) the sound of the Emissions (coming through your speakers) has changed since these "classics" were released.

I have always found the work of Nigel Ayers (aka Nocturnal Emissions) fascinating and essential listening, admittedly I haven't liked all of it - with such a canon and arsenal of regular releases I think it is impossible to like everything the Nocturnal Emissions have released. Some of their albums are too personal for me, but recently with "The Quickening" CD and the split release with Wyrm the Emissions are producing an essential sound (again).
Nigel is also a visual artist. Sculptor, collage, photography - so it comes as no surprise that "Compost" is a very visual piece. The first twenty minutes or so are built of short sections, mixed into one piece - delicate electronics - before the sounds drift into one long twenty minute piece that can only be described as "cosmic spaced out psychedelic electronica".
It all begins with found sounds, field recordings, synthesized waves and washes, random pulse patterns laying like a soundtrack to a Nigel Ayers installation or short animation film..before the spaced out electronics begin. Somehow I can imagine the audience all sat with eyes wide shut and listening to their own visuals. The sound is less rhythmic and more "comfortable" than the Berlin performance (recorded about six months apart), but at the moment I am enjoying both equally.

"Compost" was recorded in Augsburg, a great German city and where Dieter Muh recorded "Sutreworde" - the piece that appeared on Side B of "The Call" LP, although I think the venue the Emissions played; Die Ganze Backerei is a little bit different to the one Dieter Muh played; Der Kantine. We (Muh) stayed an extra day in Augsburg because we loved the City's bars so much.
With a live sound that is very similar to Soviet France "Compost" is well worth a listen. Packaged nicely in an A5 slimline plastic case and available for £6 direct from Nigel himself. Buy from www.earthlydelights.co.uk or (mainland Europe) from Attenuation Circuit. www.atenuationcircuit.de - they both have paypal.