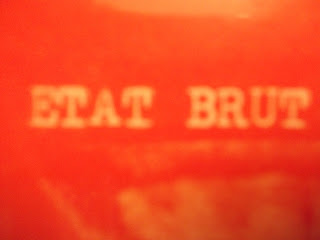 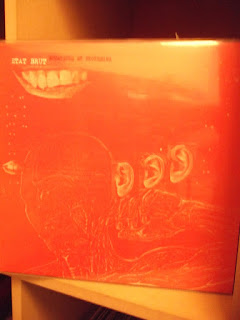 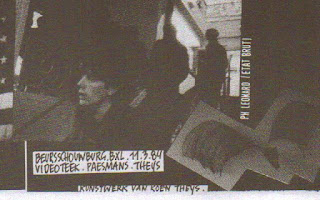 Have just spent a pleasant while listening to the album "Mutations Et Protheses" by Etat Brut. Originally released as a double cassette back in 1981, the excellent Belgian Sub Rosa label has re-issued it in single vinyl LP format. Precious.
Very little is known about the sound/art project Etat Brut. They seem to have operated between 1980 and 1983 before disappearing. They collaborated with fellow Belgians Club Moral and appeared at the London Equinox Event back in 1983...but other than that information is scarce. Allegedly a duo with both members called Phillipe.
Perhaps it is the association with the Equinox Event that the sound of Etat Brut is thought of as harsh electronics / power electronics etc. "Mutations Et Protheses" album proves this to be far from the truth. The sound has more of a DaDaist approach / feel to it reminding me of early Cabaret Voltaire cassettes and Clock DVA, especially on "Hommes Nus" with its treated vocal, flowing bass, tweaked synthesizers and Dr. Rhythm beat-box.
Most tracks here are constructed from slow bass lines, tape manipulations, factory machinery electronics with repetition and pulsations from a primitive drum machine. The closest Etat Brut come to (what is now known as) power electronics is in the piece "Bande Sonore Du Film Paysage Mental" with a synthesizer being operated like an electrical power drill. This track may or may not contain elements of DDV & AMVK.
"Mutations Et Protheses" is a great example of how experimental electronic music sounded in the late 1970's / early 1980's. Post industrial (certainly) but pre any other categorisation for the experimental electronic genre. The opening track "Informations" sounded remarkably familiar. I don't remember owning any Etat Brut back in their days of operation, perhaps this track appeared on some cassette compilation ... anyone know?
As mentioned earlier - this LP is precious and essential.

Back in the mid 1980's I started collecting releases by the Belgian label Sub Rosa. They started out in 1984 with the excellent "Myths" series. Compilation albums mixing William Burroughs with The Camberwell Now and Eyeless In Gaza and S.P.K. with Hula and General Strike. Then they put out records by William Burroughs and Genesis P-Orridge and Test Department, it was a great label to collect. By 1988 I had lost interest in collecting records and such. Poverty, a drug habit and not really hearing what I wanted to listen to all added to my ennui. But now after buying the Sub Rosa CD/Book release by Baudouin De Jaer/Adolf Wolfli I am on their mailing list and salivating over their back catalogue! Their mail order prices are extremely reasonable, and Fred (the guy who runs Sub Rosa) is very friendly.
"Mutations Et Protheses" is available in black or green vinyl and limited to 500 copies. Visit www.subrosa.net and get a copy!