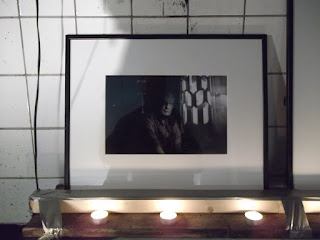 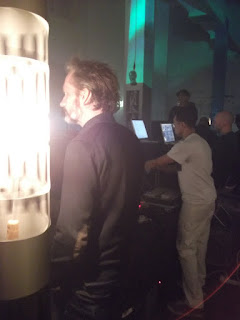 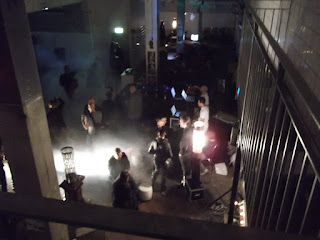 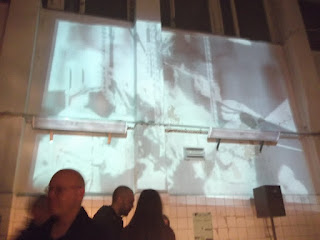 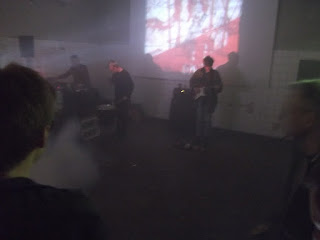 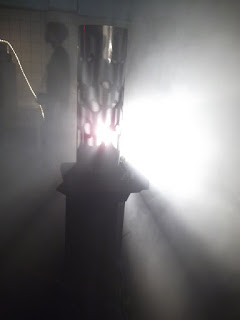 On the 27th of April, Simon and I were taken from the suburbs of Stockholm on a magickal mystery tour that ended up in a strange basement building in Hokarangen.
A dis-used apartment block. Partially dis-used - floors for galleries and studios, and a basement room. An old laundrette or boiler room, down the stairwell, through a large metal door, down a creaking wrought iron staircase into the bowels. This evening was owned by X Club.
A large space with flickering dreammachines situated around, lit from behind and from suspended light bulbs. Chairs situated communally around the machines. TV Screens showing the works of William Burroughs, Psychic TV's First Transmission, Ian Sommerville and the BBC's "Arena" documentary on Burroughs and The Final Academy. Mattresses to crash, beers to drink, dry ice to get lost in. Cinema screen sized wall projections, visuals from Mikael Prey & Fetish 23, thumping industrial dance beats from Roberto N. Peyre & Jean-Louis Huhta. Psychick Warriors Ov Gaia were alive and well and pumping out of the speakers this night.
Three young men took to playing a live cacophony to some B Movie cut-ups. This was Psychic Warfare. It could have been Ain Soph or Zero Kama or members of thee temple. You see, walking down those creaky wrought iron steps we had entered a time warp, strolled through a gap in the time space continuum and ended up somewhere in 1982.

I never thought I would experience anything like this, and certainly not a few miles north of Stockholm. Industrial Night - Magick Call Thyself. There was a shrine built for Brion, Henrik Rylander and Joachim Nordwall provided a live improvised soundtrack. It really was heaven.... (or an experience of).....

I don't know if recordings were made. Audio and/or visual. www.blot.se/blot-xclub--2.html might hold some answers. An evening I shall never forget.