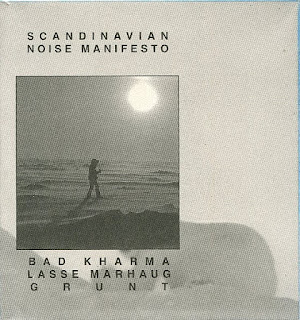 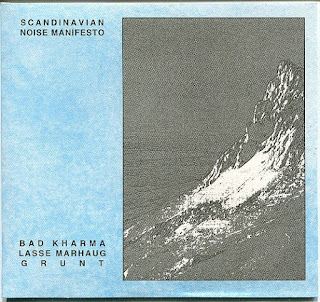 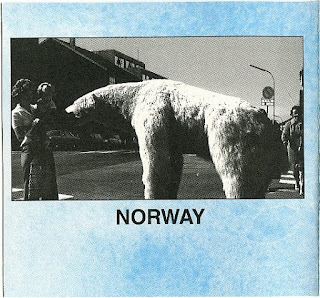 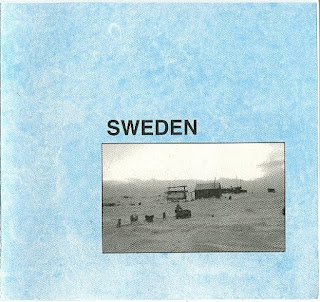 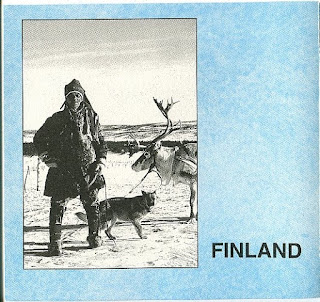 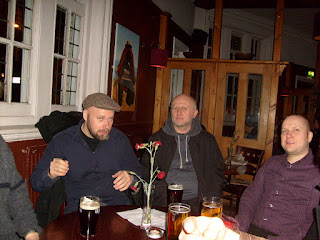 For the past couple of weeks I have been exchanging information and viewpoints on the Scandinavian "underground / sub-culture" noise (for the want of a better word) scene (for the want of an even betterer word) with good friend Paul Watson (a.k.a Mr. Bbblood).
I think it all began with me mentioning my new found joy of Sewer Election and White, and Paul mentioning the latest release by Jaakko Vanhala, which I don't have but like his work with (or in) I.Corax...and moving onto Bestializer and Paul had never heard Karmanjakan Inotonarumori, and then I probably brought in Grey Park, Henrik Rylander and White Stains ... you know how these E Mails go. I have spent a few weeks with Scandinavians, going to Sweden and staying in the company of a few and then Scandinavians seemed to be littering the bar and Merch' Stall of the Broken Flag Festival.

So...all this talk made me dig out the compilation CD "Scandinavian Noise Manifesto" featuring Bad Kharma (Sweden), Lasse Marhaug (Norway) and Grunt (Finland). It was a joint release from each projects labels (Bonbon. Jazzassin & Freak Animal Records respectively) in 1998. Sweden's Bad Kharma begin the CD with "Wasa" a 23 minute piece built from the sound of crispbread. Crispbread is place on turntables and played with a stylus, other pieces are mic'ed up and crumbled, eaten and tossed. Interesting sounds. Speed and volume varies and i imagine seeing and hearing the recording live would have been amazing....I seem to remember Project D.A.R.K. doing/releasing something similar around the same time. Next up is four pieces from Norwegian sound artist Lasse Marhaug. Lasse comes from the great Origami collective, a band of artists based in Trondheim - Origami Galaktika being a favourite here. Lasse is blistering noise - high volume white noise, close to JapNoise. The final track "Himmel Og Helvete" sounds like a thousand cats in labour through pitchshifter and distorto box. Great looped sound. High speed, high energy, high frequency, high sine-waves,high volume stuff.
When I bought the CD (back in 1998) I didn't like Lasse's contribution too much but now I can take the punishment - I can hear different loops and hooks that I couldn't before....In 2008 I saw two great live performances by Testicle Hazard (Lasse and Finnish ex-Sefahat mainman Tommi Keranen) in London...perhaps this has warmed me to the sound of Marhaug?
Grunt offer seven tracks. Seven tracks of dark and disturbing electronics. The tracks sound like Whitehouse of old...Whitehouse when they were dark and menacing and not comedy and/or vaudeville. Whitehouse of "New Britain", "Psychopathia Sexualis" and "Great White Death". Classic Whitehouse. This is no Whitehouse copyist material...don't get me wrong...it is just the feeling of unease the sound carries. Excellent titles like "Family Life", "Liquor Homicide", "Inbred Community" bring to the fore Grunts' take on Suomi life. Standout track being "Innocence Kills". A voice tape looped and manipulated to the point of genius over a soundtrack of despair. A piece that is close to Mikko Aspa's other work as Alchemy Of The 20th Century. The sound of Mnem is also prevelant in Mikko's work around this time. Despite being released under the noise banner only the tracks by Lasse Marhaug can be seen (and heard) as noise Per Se.

I have rediscovered this album - it's a classic, file alongside other "old school" Scandinavian noise compilations such as Negart's "Members Ov Sonic Cults" tape, Freak Animal's "Degenerating Finland" CD and "Sweetness Overcome" on Swedish Segerhuva label.

And now there are so many Scandinavian projects to discover. Paul recommends the Danish Posh Isolation labels' output and a group called Alleypisser (awful name). Do Danes count as Scandinavians? The only Danish band of note (I can think of) is Sort Sol - I'll look out for Posh Isolation releases.