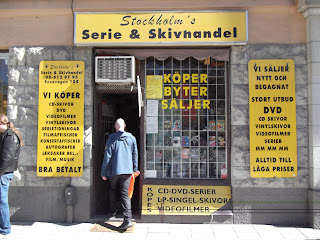 Stockholm has plenty of secondhand record shops, last weekend was my third visit top the fair City and I know there are plenty of great vinyl emporiums around, but this visit I was on limited time so I made a special visit to "Serie & Skinhandel"; my favourite shop in Stockholm.

Story: 12 years ago I made my first visit to Stockholm. A 24 sleepless hours after leaving Mantsala in Eastern Finland four of us (that is myself, Dave Uden, Mark "Mr. Putrefier" Durgan & Steve Underwood) staggered from the Suomi cruise ship onto a coach that left us at Stockholm's central station. We discovered that it was fourteen hours before our train left for Berlin (via Malmo) so we had fourteen hours to kill in Stockholm. It was May 31, 2000 one of the hottest days in Sweden's history. We had (collectively) very little Krona and no real idea of how to kill fourteen hours in a City that we didn't really know...on top of this Dave was ill. Really ill - gone a funny colour ill...he had eaten fish on the boat! The chemists at the train station recommended sleep and gave Dave a medicine that had the taste (apparently) and consistency of elephant semen. He drank and fell worse.
Not wanting to spend the day in the train station we wandered out onto the streets of Stockholm, not knowing really where we were going and at the same time not wanting to stray too far from amenities with toilets for Dave's sake. Coffee and a complimentary almond biscuit was lunch (it really was hard times) at some street vendor's cabin and then we chanced upon "Serie & Skinhandel" on Sveavagen - a main artery through the city centre.
The shop is opposite a McDonalds..which is lucky as that is where Dave spent most of the afternoon, decorating one of their toilet cubicles, and McDonalds is next to a park with trees, which was great for Mark as he fell asleep in the shade of a blessed elm. Steve and I dived into the shop. Back in 2000, the front of the shop was mainly hardcore pornography - videos and magazines, and the back of the shop was a cave of vinyl. Good vinyl too. Browsable vinyl - buyable vinyl - not a shop to be visiting with sick friends and an empty wallet.
May 31st. 2000. I vowed to return.

April 28th. 2012. I returned.
As mentioned, the shop is on a main road that runs (virtually) from Stockholm central to the library. That road is the Sveavagen. The shop itself is a fifteen minute walk from Stockholm Central Station - and is still worth a visit. The front "parlour" is now home to CD's and DVD's and not solely pornography - even the racks of Scando Pocket Porn has disappeared, replaced by comics and graphic "novels". Not to worry as the vinyl is still there. Naturally the stuff is expensive - everything in Stockholm is expensive, a city where a packet of crisps will set you back £2.60. I had a great time browsing through the punk/post-punk/Swedish punk/Industrial/Goth/Indie/Experimental and recent arrivals racks.
I found a copy of  the 7" classic "Transit" by The Lines (on Red Records) and a 1999 Chthonic Force 7" featuring Peter Sotos on vocals, both for £12.50. I left happy - one with the purchases and two at finding (and actually shopping in) such a  great shop.
If in Stockholm, please pay a visit.