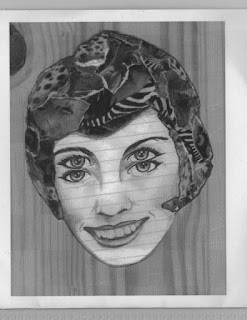 I must admit that I am not a great fan of the Chocolate Monk label, they have released an awful amount of cheap looking/sounding shite in the past and when I found out that the latest offering from Duncan Harrison was on Chocolate Monk I must admit to feeling a tad disappointed, but not to worry the Monksters have done a fine job, with excellent sound quality and an OK sleeve (artwork by Karen Constance).
Since getting this beauty on Saturday it is all I have been playing. Instant classic, and not what I expected (as Crispy Ambulance once said). Duncan Harrison "Young Arms" is a slice of the absurd, of dadaism, of concret and surrealism. Past Harrison releases have been spacious, noisy and (in parts) rhythmic...."Young Arms" is none of these. If anything it is more claustrophobic. I have a feeling it is a collection of recordings from Duncan's youth - tape recorder experiments and field recordings combined and put together to create an album of beauty.
The CDr begins with the title track. The sound of interference through a broken amplifier. Dead air caught on a CB Radio before "Young Arms" a short poem for three voices. Everything including the kitchen sink is thrown into "17/18", a short sketch piece that would not be out of place on a La Monte Young retrospective. "Olympiad" is a 9 minute dadaist jigsaw, with pieces of stretched and scraped violin strings, flute, cymbals, ukulele, tambourine that when assembled has voices of Inuit chanting, drunk ramblings and defecating grunts. Fascinating listening..then home electronics are made to sound like distant drills.
"Duncan...this onion is fucking strong....Duncan"
"24/25" is a five minute composition of environmental ennui from a bedsit that is too close to the Northern Line. A damp and disconcerting vibration takes over before Dale Cornish (from Baraclough) reprises the short "Young Arms" poem. Masterpiece. This CDr is only 35 minutes or so in length and half of it is taken with Frippesque titled "Transmigrate To Solipsist Hut (All The Young Dudes)". It is a great slice of celestial drone, weaving patterns and frequencies a la vintage Maeror Tri before sounding like an intro tape to a 1974 Camel gig! And to think....15 years ago I used to have a dry ice machine...damn you EBay.
The final piece "Prodigal Youth" is a sixty second track of the composer standing in the dark holding a microphone.

So far 2012 has been a great year for new releases (anyone want a new Dieter Muh vinyl LP)? "Young Arms" is added to that list. It is available for five and a half quid - yes! just five and a half quid from Chocolate Monk: www.chocolatemonk.co.uk/available.htm - they have paypal. You have no excuses.
Posted by Steve at 20:06