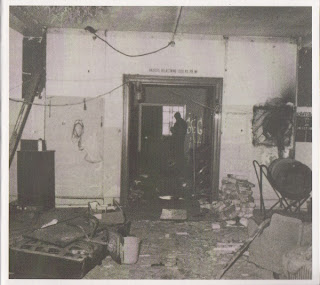 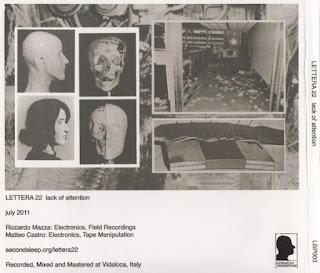 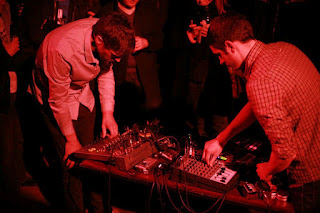 It is good to see that reviews and recollections from this months Broken Flag weekend extravaganza are popping up on various web sites and blog pages. Interesting to read other folks' accounts / thoughts. There was one guys report where he claims he was the only gay sausage at the venue. I can assure you Joseph that you were not the only gay (male or female) at The Dome that weekend. Also yet to read a shared opinion on the Consumer Electronics performance. I thought it was awful, embarrassingly awful, still it is funny to see what people will swallow these days. (I have seen Consumer Electronics live on a few occasions and can never forget the powerful performance in Bristol 2005 - the gig with Onomatopoeia and Emil Beaulieau - it was compelling stuff, violent vitriol over a dull and aching soundtrack. I stood, watching, listening, amazed. Nottingham a year later - with Dieter Muh and Prurient - was similar but with a poor PA the poetry was lost).
It was at the Broken Flag weekend that I first saw and heard Lettera 22. The N.K.O.T.B. of noise. I picked up the CD "Lack Of Attention" (on the Swedish Ljud + Bild Produktion label) a couple of weeks ago from Dan of Sewer Election / White fame, but didn't get a chance to play it before the London event. I never caught them live either, I was "working the door" during their slot. I did get to hear the soundcheck. A glorious soundcheck too where electric shapes and frequencies, angular and angry noises were bounced around an empty room. The noise lasted minutes, mere minutes and seconds but it was a noise that rooted me (smiling) to the spot. It was like hearing the live sound of Das Synthetische Mischgewebe and/or Government Alpha for the very first time. The head just fills with bewilderment and delight and the ears are left ringing.
"Lack Of Attention" also reminds me of Das Synthetische Mischgewebe "some Conceptual Obligations" CD and "Snakes And Ladders" by Government Alpha. Two releases I went out and bought after witnessing their live assaults. A lot of the sound just doesn't cut it on CD. Dynamics are lost somehow, a dimension is removed. I am not saying that "Lack Of Attention" is a poor album, it clearly isn't ... there are moments - usually the quieter ones where the sound grabs my attention, small experiments with synthesizer, metal and the surroundings but largely it plays like a Japanese creation from the mid-1990's. Masonna or Merzbow and neither are my cup of tea.
Undoubtedly a noise classic (the word on the street - or forum boards - prove it) and beautifully packaged in a monochrome and grey gatefold digi-pack. The Macronympha "Super Oxide" CD on Ljud & Bild Produktion is similarly beautifully packaged. Available from all good noise outlets ... in the UK that means Second Layer Records.