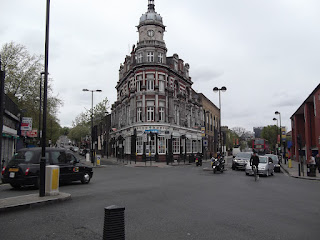 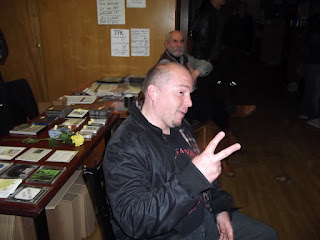 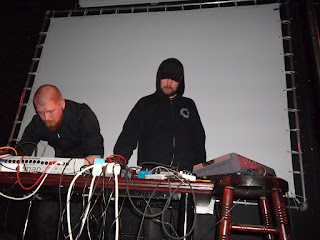 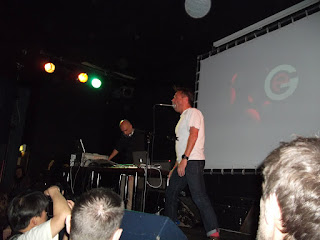 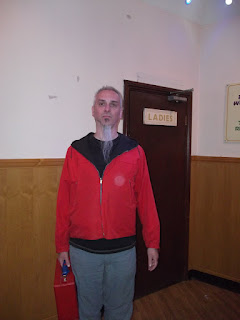 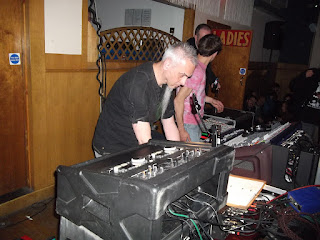 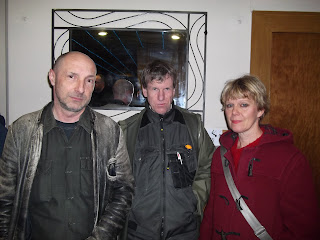 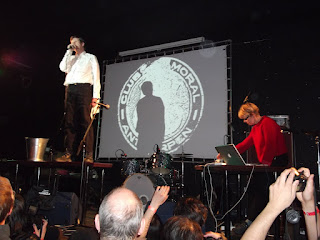 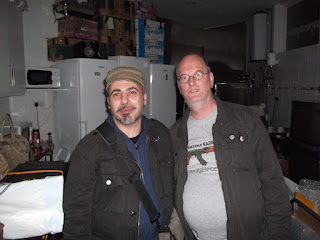 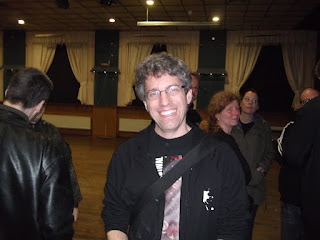 I have just returned / recovered from the weekend that was the "Never Say When : 30 Years Of Broken Flag" festival in London. Initially I wasn't going to attend the event, with it being seven days after the Dieter Muh / Contrastate Stockholm gig but Steve Underwood convinced me to come along and be an "assistant" and Simon Kane offered free food & lodging...so how could I refuse?
There are many many words written about this weekend already on various forum boards and blog spots, even some live footage on YouTube so I won't dig deep into my thoughts on what I experienced / saw ... I will just say that there were a few projects / artists that really interested me, and fortunately I got to see some of them perform. A few of the bands on were awful, bloody awful. A couple were amateur and seemed to forget that folk had paid hard earned cash to be in the same room as ... and then there was:

I could not make the Friday night due to work commitments so I sorely missed Le Syndicat & Con-Dom.
The venue itself was a strange choice. The Dome in Tufnell Park is a room above a pub. A bleak house called "The Boston Arms". When hearing about the event being held at the "Dome" I had images of a grand venue with multiple rooms and interesting spaces, like the venue where the LAFMS event was held a few years back, but no. The Dome is a room albeit a large room above The Boston Arms pub. As mentioned I missed the Friday, but the magnet for Saturday was Esplendor Geometrico - the debut UK live performance. Hard electronic rhythms, pulsed loud across the dance floor, bodies moved in time. There was no light show, no subterranean no occult feeling, the sound was loud-as loud as it had to be and it was an absolute joy to see and hear but the performance fell short of experience - perhaps I was expecting too much? I was surprised to hear that the dance beats had an end. Press pause, stop, play effect between tracks...surely they could have "mixed" the set into one 40 odd minute piece? Or perhaps it was a comment on the "rock" surround?
I missed Grunt and Lettera 22 (door duties) but both projects sound checks were quite amazing.

Sunday was a necessity for Giancarlo Toniutti & Club Moral. Again, work held me back from seeing a lot of Giancarlo's performance, a shame but I saw/heard enough to know that the room was in the presence of a genius.
Club Moral had me in tears by the end of their performance. "This is a prelude to a motorcycle accident" declared Danny Devos stood high above the throng on a wooden table. DDV & AMVK were bringing their art to The Boston Arms. Danny recited the importance of May 6th before responding to the dates and repeating the words with his head in a bucket full of water ... the performance went on........PLEASE plumb Club Moral Broken Flag 2012 into the YouTube search engine and you will discover why I ended up in tears of bewilderment and joy. I have (patiently) waited almost 30 years to see Club Moral, Giancarlo Toniutti and Esplendor Geometrico perform live, and despite it being in a room above a bleak pub in North London I fully enjoyed the experience.

I spoke to Pete of Second Layer and he explained the reason for the weekend being held at The Dome - and his "argument" stands, it was a capacity choice, and that is fair enough.
Big thanks to Pete and Steve for letting me assist over the weekend. It really was enjoyable and great to see some old friends and meet folk like Frank from VOD, Jean-Marie from Le Syndicat and Ethan Port from Savage Republic for the first time. And thanks to folk who gave me CD's and tapes and vinyl to listen to...much appreciated.