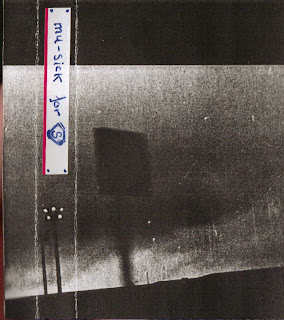 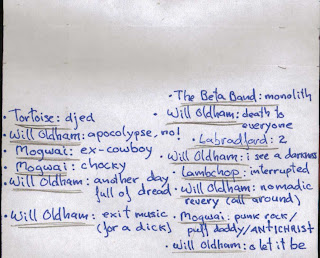 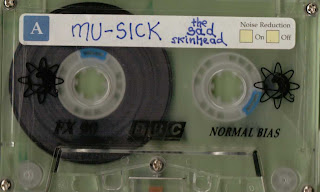 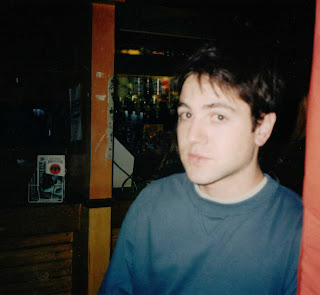 I have had this cassette for roughly 13 years now and really it should be at the bottom, or at least near the bottom, of the pile of cassettes that rarely get an outing. Non of the groups/artists on the cassette are favourites. I own nothing by the groups/artists on the cassette. I did used to have a Labradford 10"EP back in 1996, but a chap called "Mad" Phil Benton borrowed it from me (along with some Stereolab discs) whilst we were sharing a house in York and I have never seen it since.
In early 1998 Dieter Muh were played on a Spanish radio station called "Radio Banzai", it was early doors for Dieter Muh and a play on a Spanish radio station was an excitement for me, I asked for a cassette of the show on which Dieter Muh were played and true to their word I received a C90 with Dieter Muh on the playlist. It's a great tape. Muh is played in between Contagious Orgasm and (I think) Small Cruel Party. During the broadcast the two DJ's chatted about Dieter Muh and the chosen track; "Morche" from the CD album "Black Square". It became a mission to discover what the two Spanish hombres were saying - did they like it? Were they taking the piss? Were Dieter Muh the new name to drop in post industrial and noise circles? I had to find out!

1998 and I was working at Walkers crisp factory in Lincoln. I packed bags into boxes, I put little boxes into larger boxes, I played cards at break-time. It wasn't glamorous but it paid the rent and kept Dieter Muh in business. On the production line was a Spanish chap by the name of Alberto. Alberto was the male part of a trio of Spanish workers who were also training to become language teachers at the time. Alberto was (and indeed is) much younger than me, but he was the only Spanish male I knew and I needed a translation of the DJ speak on the Radio Banzai cassette. During a break along the production line I approached Alberto and asked if he would translate the cassette for me. Luckily he agreed and thus began our friendship.
Let me point out here that food factories are very strange places to work - I should know, I have worked in a few - and to go up to a complete stranger (work colleague or not) and present him with a cassette of "weird noise" and ask for a translation was a very very "risky" thing to do.

Shortly after the translation / getting to know you situation I left Walkers factory and Alberto graduated from teaching school and moved to London. It was during this time that Alberto started to mail me cassettes. A Mogwai tape, an excellent God Speed You Black Emperor tape (I love that name) and the compilation tape "Mu-Sick For S".
I am not a real fan of the genre that is on this cassette, mention the names to me and I would (at the time) probably of retorted cynically about shoe-gazery "Guardian" readers, arty-farty pseudo left-wing students and their chosen style of music and how it is not really my cup of tea but this tape squashes all that and throws it back in my face! Somehow Alberto has mixed all the pieces into one "megamix" so where Tortoise end and Will Oldham begins I have not got much of a clue. Well, Will Oldham sounds a little like a modern day Leonard Cohen and Mogwai songs start off pretty minimal and build in a "Velvetsy" type way to a Swansesque crescendo and The Beta Band are a little Lou Reed meets the Buena Vista Social Club with "Eastenders" drum rolls....so I suppose if I threw a little guess work into the listen I could work it all out. But there is no need to do the guess work, the cassette flows so beautifully it lets the mind wander and become nonchalant! "Death To Everyone" by Will Oldham is a beauty.
A great thing about the cassette, and why it has become a treasured item is that it has given me enough Mogwai, Will Oldham and Lambchop to listen to. It is a beautiful play and anymore songs by the same artists would be (for me) overkill....it's not my genre.

Alberto disappeared at the turn of the millennium, random messages came from Madrid, Dusseldorf and Milan. I did get a brief message at the beginning of 2011, Alberto is now a suit and tie white collar jockey in Madrid. He did mail me some Esplendor Geometrico CD's (the sweety) - hopefully we shall meet again.