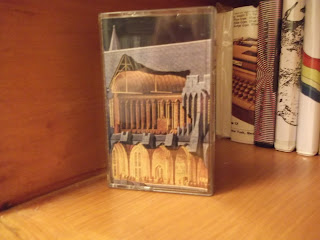 Just spent a pleasant while listening to the latest release from Preslav Literary School. "La Reflexion Du Tir", a cassette (C40) limited to 75 copies on the Russian Full Of Nothing label (www.fono.tihiiomut.ru) and worth the 7 Euros.
The cassette is inspired by the artwork of Benjamin Laurant Aman and Mathias Enard's novel "Zone". The novel centres around a spy/soldier called Francis Servain Mirkovic and his attempt to escape his past and live a "regular" life as Yuan Deroy. The two pieces on this cassette are named after the character(s). Benjamin is the man behind the excellent German label Razzle Dazzle.
"Francis Servain Mirkovic" starts very quietly and builds into a sixteen minute celestial, harmonious drone. "Yuan Deroy" also has a slow fade in, begining its' fourteen minute journey with a choral feel, the atomosphere of Gregorian Monks before adopting (again) a harmonious drone but this time more meloncholic and inward looking. It plays like an old wax cylinder of pumped organ music. Deep and beautiful stuff.

I am glad that the Preslav School Of Industry that appear on the latest "Feral Debris" compilation CDr are nothing to do with Preslav Literary School. The 'Industry track is so poor. It is hard to believe that someone/persons could name themselves such - they must know of the Literary School's existence? Still, I played the Venn Festival in Bristol a few years back and on the bill were a band from Bristol called Hunting Lodge! Anyway, I wholly recommend this release, get in touch with Full Of Nothing or Preslav Literary School at www.preslavliteraryschool.co.uk buy and enjoy...I even think there is a (gulp) download version!

Sorry about the poor picture....Scanner is still not working.
Posted by Steve at 20:13