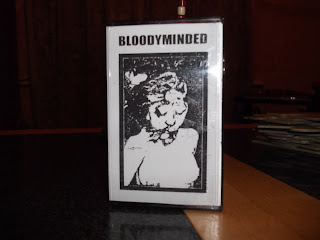 Today I resumed my playing through the 12xcassette album "Gravitational Arch Of Sex" (Slaughter Productions) by Mauthausen Orchestra, I have reached #5 : "Bloodyminded". (Good name for a band). Originally released in 1984 on the Italian Aquilifer Sodality label.
With its' beginnings, the sound of microphones being left on a deserted beach to record the lapping of the waves and the winds across the sands to the intermittent bursts of powerful synth to a track that sounds like a project called Mauthausen Orchestra should sound like. Harsh tones that cut through the air with manic male agonising screams morphing into a lyrical attack. No idea what is being communicated here (I speak no Italian) but it does sound like The Sodality track "They Never Learn" and Ultra's "I Can't Stand A Bitchy Chick" rolled into one. Excellent track.
By 1984 Mauthausen Orchestra had released on the UK Broken Flag label and maybe the influence of Gary Mundy's work along with that of Whitehouse is starting to show on "Bloodyminded"?
Side two has two instrumental pieces. It starts with industrial grind and rising and lowering oscillations before the chaos sets in. "Carcrash Electronics" is the best way to describe the sound. Manic/chaotic, all over the bloody shop! Radio space and pink noise calm the side down before a chaotic reprise and fade out.
"Bloodyminded" is a bloody good cassette and well recorded too. I suppose it is pretty daft to say that if you ever see a copy - buy! But you never know....there was an unofficial re-issue on the Australian Zero Cabal label that might be easier to find.
Posted by Steve at 19:39