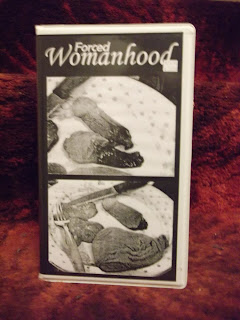 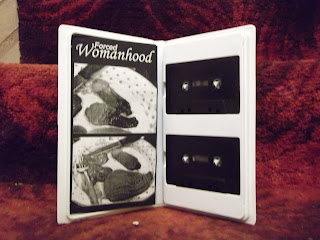 I had an E Mail the other day from a friend who had been to the "Colours Out Of Space" weekender in Brighton and his comment on some of the festival was "Everybody thinks they can be a sound artist / poet these days".
"It's not easy, to make you feel uncomfortable, it's not easy....it's not just £1.30" to quote Throbbing Gristle's "Wolverhampton £1.30". I get that feeling whilst playing the compilation release "Forced Womanhood" on 23 Productions. A 2xC60 package put out a few years back. A lot of tracks on this release are bland one dimensional noise efforts, pleasing to neither man nor ear....but there are a few gems. I remember getting it on release and playing it and liking some of the tracks and with this in mind I have been revisiting the release over the past couple of days.
Side A begins with Cleanse. Cleanse are are early incarnation of US "dronesters" Hive Mind. Here they present "Angel's Trumpet" a great slice of Industrial pulse and grind. Clew Of Theseus offer a slice of American Power Electronics with distorted shouting and chaotic electronics. Early doors for Clew here. Prurient follow with "Tailor". Well presented stuff with amplifier feedback and metal percussion. Prurient giving an isolated sparse vibe. Prosexist follow. I remember a few years back reviewing the cassette release "Krimkall" on the Krimljud label for "Idwal Fisher" magazine. On the compilation is a project called Assdestroyer - it was some young chap in his bedroom knocking out "naughty" tracks whilst his mother was downstairs doing the ironing...anyway, I did say then that you should never name yourself after a Whitehouse "song". It is too obvious and Whitehouse stand alone in the field of power electronics...it is pointless. Sure, I've just been talking about Animals & Men and myself naming a band I was in after a This Heat track title but This Heat and Adam & The Ants are not Whitehouse. Anyhow...Prosexist offer amp' feedback (yawn) and shouty shouty vocals. Karlheinz follows with a noise track. Side A ends with "Penal Exile" by Ga-Ne-Tli-Yv-S-Di. (A new name to me). It is layered synth with effects pedals and hidden (subliminal) vocals and probably the best track so far.
Side B starts with Immaculate Grotesque. This is noise that I don't quite understand. I don't understand why anyone would make it or want to listen to it. Eugenics Council follow with two pieces both called "Taint". The first track is horrible noise, the second feature an American voice shouting insults before it all fits around a rhythmic beat and it all seems to fit. Black Leather Jesus hits like a train. Chaos and noise at 125 miles per hour. V.D. give us the excellently titled "No Love For A Bottom". V.D. is a side project of Keith Brewer - he of Taint fame. It begins (again) with insults, and therefore boring...yes I am a motherfucking dicksucker who'll burn in hell...thank you very much...and it is a shame as what follows is a slice of excellent powerful electronics, just a shame it begins all cliched. Loop Retard give a Smegma style tape collage before Sweden's Survival Unit end the side with the best track "Let Me Die A Woman", a dark brooding atmospheric instrumental.
Side C starts with Prosexist (not again!!) with Raquel De Grimstone. "Paint You Up" has a good old industrial noise feel to it, it's not that good, just a pleasant surprise. Moribund offer nothing new with two tracks of slowed down sluggish vocals over distorted noise and The Viodre finish the side with an epic piece of directionless tat called "Phalcam Mancunt".
Side D kicks off with "Slut Torture" by Panicsville. Where do they get these titles from? The sound is forced and poor. A poor de force. Two pieces by Karmanjakan Intonarumori follow and these two slices of innovative, cleverly constructed masterpieces is what makes the compilation worth having. No comparisons to any other artiste / sound can be made here. Slow staggering electronics and spoken madness. K.I. is an early project of Bestializer, and one of Sweden's finest noise makers. Human Is Filth offer up "Penectomic Scission Vivisection", an insane onslaught of pounding electronics and feedback. Concrete Violin follow. It is a strand of thought amongst "noisefolk" that when recording a "noise" track that sticking everything "in the red" sounds good. Misguided fools. A track of tiresome tape splicing tomfoolery ends the compilation. "Bitch Me In" by the strangely titled project Mansfield Deathtrap. Are they from Mansfield, Nottinghamshire?
The release is finely packaged in a DVD type slim case with a booklet of "naughty schoolboy" pictures. Anal penetration, castration, open vagina collage stuff. The tracks were compiled by Clay Ruby and Karen Eliot (the Alan Smithee of noise albums)!
If seen - buy - if just for Karmanjakan Intonarumori, Survival Unit and Prurient.
Posted by Steve at 20:05