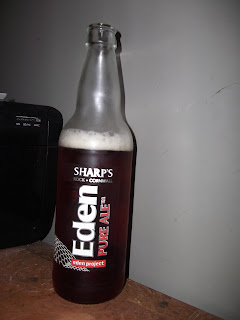 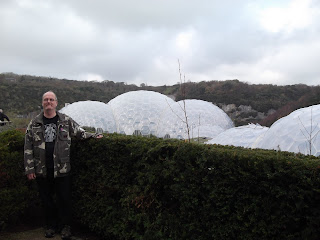 In the interests of bringing you information on new and exotic beers I ventured to the Eden Project in Bodleva, Cornwall and bought some Eden Pure Ale. Eden Pure Ale is brewed at Sharp's Brewery in Rock, Cornwall and I'm not too certain on its' availability outside the Eden Project but it probably isn't worth paying the £22 entrance fee to try it - go to the Sharp's Brewery web site and buy some online. ( www.sharpsbrewery.co.uk).
A 500ml bottle set me back £2.50, so it's not a cheap tipple and runs at only 4.5% Vol. It is however quite tasty - refreshing almost, very light and fruity. Sharps brew another ale called "Doom Bar" and Eden Pure Ale is very similar. There is a new ale by Sharp's called "D.W." brewed for the Xmas drinkers market (hello)! and proceeds go to a Cornish Hospice so I'll try and hunt some down. Drinking for Cancer.