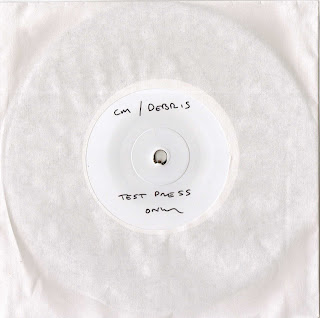 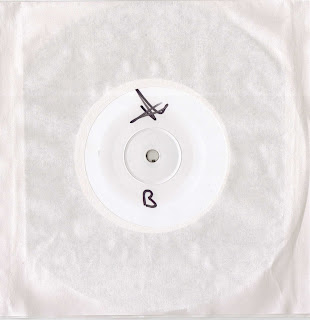 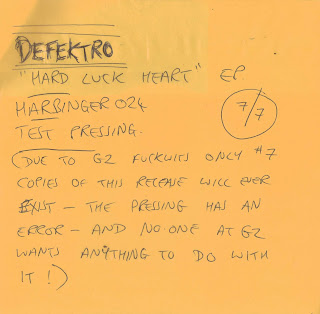 Last weekend I received a copy of "Debris" a 7" test pressing by Cheapmachines. Due to the test pressing being unsatisfactory the 7" never was released, a shame because I really like what Cheapmachines were doing here. As a rule, and as far as I understand although let it be known I am no expert, I thought that if one test pressing was unsatisfactory the pressing plant would then run off a few more copies with the problem (hopefully) solved but in the case of "Debris" the single was never released. The project was never realised. A real shame.
I have another "faulty" test pressing, that of Defektro's "Hard Luck Heart" EP...after many moons the single was finally released, maybe that's be the story with "Debris". Anyway, I contacted Phil Julian (AKA Cheapmachines) to a: thank him for the vinyl & b: probe him on the test pressing.

I am playing the single loud and at 33rpm. Is that correct?

It's cut at 45rpm both sides, but I'm not precious about it if you prefer the slowed version :)

You are not happy with the pressing. There are moments when (on side A) it sounds like a pause button is being held in for a micro-second, also there is a massive drop and rise in volume towards the end....was this the problem?

Yes, those are the main problems, along with the mobile phone blips on side 2 from the guy doing the cutting, evidently texting someone while he should have been concentrating...

Side A has some great "old industrial" style sounds and textures, making me think of 1975-76 Throbbing Gristle (the Giftgas CD on Dossier for Eg), what was the instrument line-up for this track?

Thanks, that's a big compliment. Both sides are semi-improvised computer pieces recorded at the same time as the tracks for "Secede": http://www.discogs.com/Cheapmachines-Secede/release/1845512

The two tracks sounded better side-by-side than crow barred into the album so the intention was to make it a 7". Never happened as a proper release, only these test pressings exist. I might come back to it at some point... using a different pressing plant of course.

Both tracks were improvised, then some layering and then editing mainly for length. Don't recall any direct contact micing but there are a number of samples being yanked about in there which could well have been derived from a contacted mic-ed object or two. Jazzed-up Punk Shit Wall ;)

If you could respond to one or all of these questions, I'll put them on my blog - if you can't be arsed, fair do's.
Thanks (again) for the package.

Also with the 7" came a new C20 cassette release "Accessory". This was made to support Cheapmachines live events in October. Left over copies are available directly from Phil at www.cmx.org I've enjoyed a couple of plays but I'm slowly letting it into my psyche....