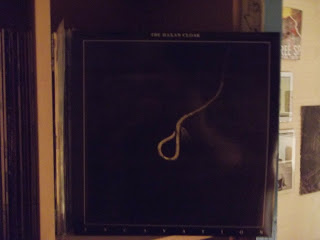 My mother used to say "If you can't say anything nice then don't say anything at all" but I have had such a disappointing time listening to the latest album by The Haxan Cloak I thought I'd mention it. The  eponymous debut LP and preceding 12" (both on Aurora Borealis) were excellent releases, so much so I went and bought the T-Shirt but this LP has to be the last straw.
Very polished. The album (I bought the 2x12"EP version) has a very polished sound, a computer generated sound that carries echoes of mid 1990's Scorn and a bit like Zoviet*France when they weren't that good. Side A (which carries the title track - parts 1&2) sounds like a condensed soundtrack to a "Resident Evil"esque film. There are lots of sounds, tweaks and beats and little piano doodles but the tracks don't go anywhere. I realised I was just listening. Side B is very similar ... nice pulsebeat fades on the "Miste" track, but it is like listening to an audition recording for a video game soundtrack. Side C is "The Mirror Reflecting Parts 1&2" and is quite simply a poor man's Coil. Side D starts with "Dieu", and a violin can be heard in the distance. The violins on the first LP were so good, skeletal and orchestral playing like the Mauthausen Orchestra but here they are hidden behind a very poor rhythm. "The Drop" started with a bad five note keys pattern .. needle off the groove.
So - A big let down and a shame. The last Haxan Cloak I shall buy - unless (of course) things pick up but at the moment it is music for The Wire readers.
Posted by Steve at 17:47