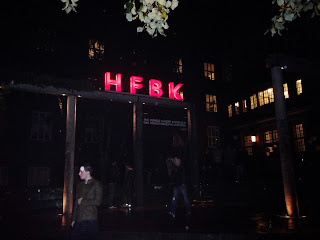 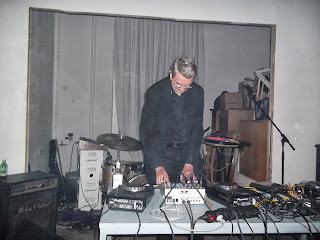 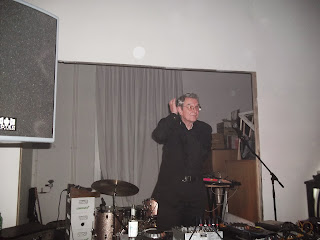 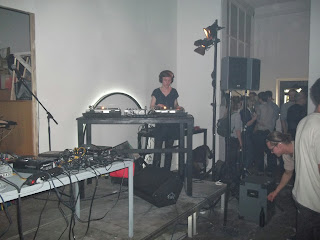 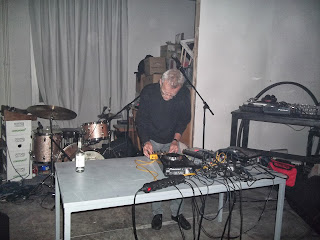 I am no Asmus Tietchens aficionado. I have been listening to experimental electronic music for nigh on thirty five years now so of course I have some Tietchens dotted about my collection. Tracks on various compilations, the odd 7" single etc .. but I do not have great knowledge of his work. This aside, I was very excited to learn that Asmus was playing a "free gig" at Hamburg University the day I arrive and have a free night.
Hamburg University was celebrating 100 years of being in business and tonight saw loads of Hamburg's finest perform on various stages on a variety of levels inside the great building. To get to where Asmus Tietchens was performing I passed through a performance by Palais Schaumberg. (Who, according to my host - Michael - are quite good but I always grouped them in with Aha and Fra Lippo Lippi). The building was a sea of people. It was a free event but I have never seen such an amount of souls in such a small place. The building was thick with folk and thick with smoke. I don't know if Germany has a smoking ban but the people smoke inside buildings and the air becomes thick with acrid  fog, it is not pleasant.
It seemed to take an age for Asmus to perform. A DJ span discs by Dome, Throbbing Gristle, Chris & Cosey, Kraftwerk and various Euro EBM merchants but I was tiring after an hour or so of her playing. I was now hearing stories of previous Tietchens performances, Sets of blistering noise, sets of silence. What we got tonight was a set of rising waves of sound. Looping and returning to wash over the audience. Extracts of tweaking and bubbling littered the "set" but it was a sound to "get lost in" over about thirty minutes.  Loud crashing waves of electric bliss. Downside (apart from the smoke filled air) was the audience, a vast majority of which were not there to witness Asmus but to drink and "party" thus shouting through some of the quieter moments. Always a possibility at the "free concert".
Asmus was swiftly followed by fellow Hamburger and founder of Cluster Dieter Moebius. After five or so minutes of great loud abstract scraping and clanking the sound morphed in to "techno" beats ... we left.
A great experience and a gig I shall never forget.