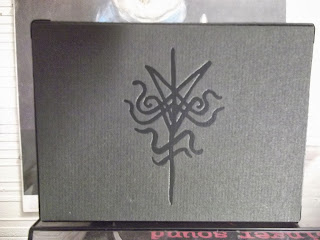 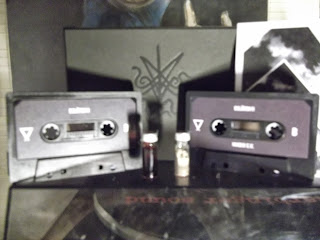 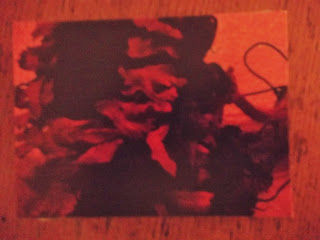 It was Andrew Hartwell of Aurora Borealis label that first recommended Sutekh Hexen to me. A kind of "If you like Burial Hex you'll love these" recommendation. The name came up a few times but their releases were either ultra limited  - the cassettes on Fragment Factory seem to sell out before release or were only available from US Distro's - and I try and avoid them due to crazy P&P prices. (Not the distributors fault I know but when P&P costs more than the item itself it all seems a bit daft). Anyway - Sutekh Hexen now have a release on the Swedish Belaten label, so I made certain to put myself down for a copy. Belaten have been consistent in releasing some of the finest quality electronic avant-garde and pop tones for the past couple of years.
Sutekh Hexen are a duo comprised of Andrew Way and Kevin Yuen and are based in the San Francisco Bay Area.
"Monument Of Decay" is a re-release of a 12"EP put out by US label Black Horizons and comes in the 2xC10 format. 4 tracks / pieces of dark atmospheric ambient drone. "Lastness" sounds like it could be used for the opening credits of a "horror" film with its atmospheric low moans and drones, stone and metal raspings and scrapings. Dark .... very dark. "...Of Emanation" is loud! Imagine one thousand Venom albums all played at the same time at 16rpm through sonic distortion pedals and then have Th. ToT of Trepaneringsritualen vocalize over the top and you have the sound of this piece.
The two pieces on tape two have Arabic titles - written in Sanskrit? Side "C" is "Dhumavati's Hunger". A crushing wall of static with great bass frequencies swirling around beneath the awareness. Deep in the woods a Satanic Mass is swinging to paraphrase The Birthday Party. "Dhumavati's Hunger" ends too sudden - like this is just an excerpt - this slightly annoys me. "Dakhma" is the final piece. Guitar drone with waves of (c)rippling noise flooding the ear space, again Th. ToT is involved in the atmosphere.
Cracking stuff indeed and I'll try and get some more Sutekh Hexen.
This release is limited to 200 copies, 23 of which come in a special box with cards, a download key and two vials of blood and ash. Another superb Belaten release.
Available from www.belaten.bandcamp.com