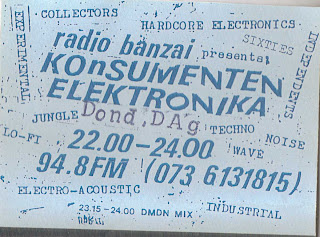 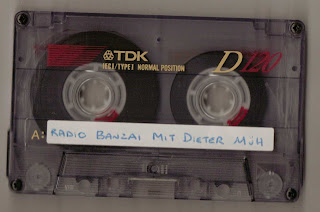 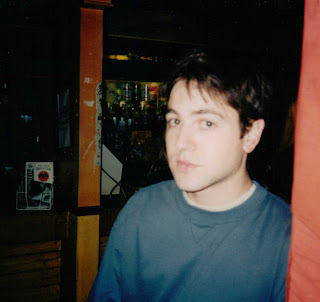 This is a great compilation tape and is a treasured item because it was the first time Dieter Muh were played "on the radio". OK OK there was that time where our recordings were played by Tommi Grundland of Sahko Recordings in Finland on National Suomi Radio, but I have never heard a document from that show and Dave (at the time) was very ambivalous about it all that it may just be a myth in the history of Dieter Muh - like the Harbinger Sound 1 second loop flexi-disc and the .... well the Harbinger Sound flexi-disc anyway which Dave said he had a copy of but I have never seen.
Back in the late 1990's I was sharing a house (in Lincoln) with Outsider Records supremo Mick McDaid. Outsider Records released some fine vinyl and is well worth checking out. The final vinyl from Contrastate, a great 7"EP by Project D.A.R.K. that I mentioned earlier, a classic split 7" by Meixner + Band Of Pain and a little grower by Lincoln's answer to The Legendary Pink Dots Cacophony '3.3'. Good stuff. Anyway (forget the Delphium stuff...they're shite) Mick was always getting requests from folk to mail his stuff to them to play on their radio shows, usually US College Radio stuff, but I took a shine to the request from Radio Banzai of Barcelona. This was all in the days before internet radio - live streaming broadcasts or whatever this was "run your fingers across the dial and tune in radio". Proper job. I mailed them a copy of our first "official" CD "Black Square" and asked them if they ever did play a track from the album on the radio could they please mail a cassette of the broadcast and they did.
I extended the correspondence by trying to get a live gig in Barcelona but nothing came of it.
The tape starts with a track by Contagious Orgasm - the track from the split 7" with Third Organ (it's a beauty) and that is mixed in with Dieter Muh's "Morche". "Morche" was our most rhythmic piece on the album, heavy on drum machine and guitar. I used to play the guitar back then! Dave had written the drum pattern and Tim and I worked bass and guitar (respectively) around the beat. It was recorded at ICR Studios by Colin Potter and he commented on how much it reminded him of Chrome - so I just made the title an anagram, and sound like a Soviet France out-take. The tape also features tracks by Plant Bach Ofnus, Yona Kit, Splintered, Mainliner, Smell & Quim, Onomatopoeia, S*Core, R:H:Y, Dissecting Table and tracks from the RRR Records compilation "America The Beautiful". I did say it was a great tape and all interspersed with some guy speaking Spanish - really quickly.

Back in 1997 I was working at Walkers Crisp Factory in Bracebridge, Lincoln. Not a glamorous job by any means but certainly a nice wage earner. "Shift-Work". The Fall wrote a song about it. Working at the same time was a Spanish student called Alberto, I cautiously asked Alberto to take the cassette home and translate what the DJ says about the second track, the one by Dieter Muh...as it was me! I am glad I did as a 13 year friendship started that day. (The DJ thought we were psychedelic by the way). Alberto has given me tapes by Will Oldham, Mogwai and God Speed You Black Emperor and I have put him on the guest-list for our London gigs. Fair exchange (he moved to London shortly after - and I left the crisp factory). Alberto is now back in Madrid. I don't know what happened to Radio Banzai, probably went onto the internet. Dieter Muh never got the Barcelona gig. A shame as we'd've been great at SONAR.