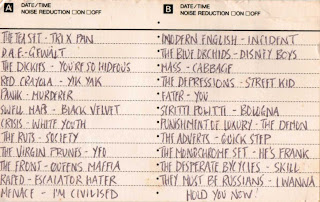 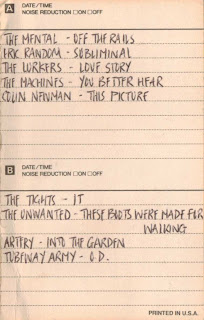 When I was a teenager, aged 14 or 15 I used to play a game with my friends. They would come round to my place of an evening and I'd test their knowledge on music by playing snippets of tracks and seeing if they could guess what the song was. 2 seconds of intro or 2 seconds of the needle being dropped anywhere on the vinyl, that kind of thing. "Name That Tune". Although a tune was hardly ever involved!
Twenty years ago (great song) I got this cassette from (my mate) Tim. It had no sleeve or track listing, it came with the challenge of track list this yourself. I love a challenge and this cassette has been a treasured item in my tape collection ever since. Most of the tracks are compiled of records that I used to own before the fateful day in 1983 and the burglary we don't talk about. I have managed to re-buy a vast majority here...but some of the vinyl now goes for funny money. Where once I payed 49 or 79p at Sanctuary Records Lincoln, the "p" has changed from pence to pounds. Not to worry - I have this tape.
Tim tried to make it more difficult by making all the tracks "B" Sides but I got 'em all except for The Mental & The Machines. I seem to remember thinking The Mental were The Blanks - how naive! One thing that does "stick out" is the variety of sound that I was listening to back then, it is impossible to lumpen "punk" into one bracket of sound, and there's some bloody good songs on this tape. The tape kicks off with The Tea Set, I used to love The Tea Set, unfortunately saw them live too late; they had signed to United Artists Records and were trying to have a chart hit with "Keep On Running". Never mind, at least they didn't release a crappy album like (say) Scars who after a quartet of fine 7"er's put out a really weak album. The tape is also a fine map of what I was listening to in the late 1970's - early 1980's. I much preferred songs by Menace, Swell Maps, The Tights to what was being pumped out by the likes of The Jam, The Clash, Sham 69 or Sex Pistols. I would rather listen to "Escalator Hater" by Raped than "Complete Control" by The Clash or "Street Kid" by The Depressions than "Holidays In The Sun" by Sex Pistols any day. One of my favourite bands is The Depressions, not a bad release in their arsenal. Their second LP "If You Know What I Mean"? (where they had shortened their name to The D.P's) is a new wave classic and head and shoulders above "Give 'Em Enough Rope" or "Tonic For The Troops". Every (and I mean every) track on this cassette is a gem, a classic, it is a treasured item.
Whilst playing the tape today ( singing along with Crisis and The Monochrome Set), I was brought back to a comment in the Ian McCulloch book where they went into a cheaper studio to record (in a day) a "B-Side" to the soon to be released single. I don't think any track on this cassette was recorded "for the B-Side", every track on this tape is strong and powerful enough to be "A" side. Obviously by the mid 1980's and bands like Echo & The Bunnymen cheapened the single by recording novelty or weaker material for the "B" Side.

I have no idea why I cut out a picture of a hand grasping a wrist for the sleeve. It comes from a GMB tract / pamphlet....No idea.