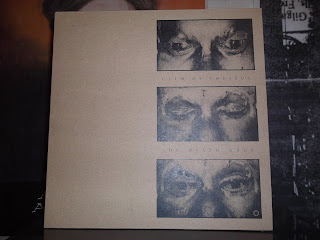 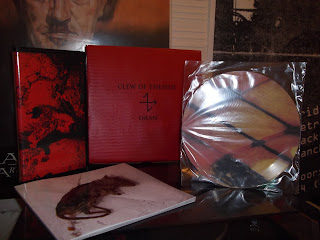 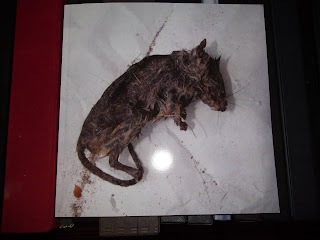 For those of you who like their drone, industrial soundscape, ambient, noise loops and deconstruction to be played with analog synthesizers, natural instruments and all to be organically recorded then you can do no wrong with Clew Of Theseus.
Clew Of Theseus is the solo project of New York based (but Arizona born....research) artist Ben Brucato. (Ben also records under the name of Emesis, but I have yet to hear any of this project). Clew Of Theseus is a name rather like Hum Of The Druid and Tenhornedbeast and a name I wouldn't have explored but earlier in the year I was sent the LP "The Death Urge", released by German label Verlautbarung Records and I immediately became a "fan". "The Death Urge" presents two long drone soundscapes and is to be filed alongside Soviet France and Maeror Tri. Earlier this week I managed to get a copy of the "Oran" Box Set. "Oran" is two C50 cassettes recorded between 2008 and 2009. Thirteen tracks of (old school) industrial drone utilising the sounds of prepared piano, guitars, bells, metal percussion, oscillators and harmonica. Each (untitled) piece is perfect in length. No track is too short to have me going "I want more" or too long to have me reaching for the fast forward button. Neither do the tracks sound like extracts from longer pieces edited to fit on the tapes - it is a perfect album. I am brought to mind the sound of Aaron Dilloway, Duncan Harrison and Robert Turman amongst others previously mentioned. Also in the box comes an 8" Lathe Cut, no information but I played at 33 rpm. One long piece of metal scrapings and drone sounding like it was recorded in a disused warehouse and one short piece of guitar frenzy looped. Hey, it's a lathe cut and it played...bonus! To accompany the sounds the box includes a 48 page book of black & white photographs of desolation and ruin amongst (what I think is) Flagstaff, Arizona. (I could be wrong...I've never been).
"Oran" is a beauty. The Box Set version is limited to 20 copies. There is a standard 2xC50 version, both available from Ben's label and distro "Cathartic Process". www.catharticprocess.com or E Mail; ben@catharticprocess.com Two albums that deserve to be heard, and a project I am going to try and find more stuff by.